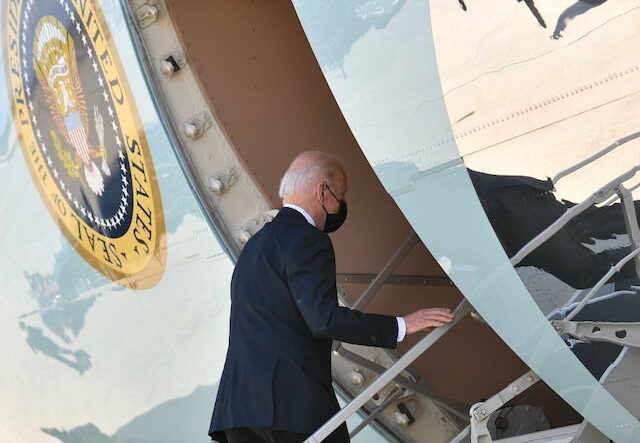 President Joe Biden sided with the Centers for Disease Control recommendation by wearing a mask on Tuesday during an Air Force One trip to New Hampshire.

The president chose to wear a mask even though a federal judge on Monday overturned the mask mandate extended by the CDC, citing the ongoing coronavirus pandemic as a reason.https://081109a1ee03c0b23e5d230af071d145.safeframe.googlesyndication.com/safeframe/1-0-38/html/container.html

U.S. President Joe Biden arrives to board Air Force One before departing from Joint Base Andrews in Maryland on April 19, 2022. – Biden is heading to Portsmouth, New Hampshire. (MANDEL NGAN/AFP via Getty Images)

Biden exited the presidential limousine wearing a mask and after shaking hands with a maskless official boarded Air Force One while wearing continuing to wear his mask.

U.S. President Joe Biden is greeted by Col. Matthew Jones, Commander, 89th Airlift Wing, on arrival to board Air Force One before departing from Joint Base Andrews in Maryland on April 19, 2022. Biden is heading to Portsmouth, New Hampshire. (MANDEL NGAN/AFP via Getty Images)

U.S. District Judge Kathryn Kimball Mizelle of the Middle District of Florida ruled Monday the CDC mandate exceeded their authority. That prompted the Transportation Security Agency to announce that they would no longer enforce the mandate, making the decision to wear a mask voluntarily.

Several videos of cheering air travelers ditching their masks after airline employees made the announcement emerged on social media, marking a new chapter in the return to normal during the coronavirus pandemic.

But the White House sided with the CDC’s directive, ordering all their staff and members of the media traveling with the president to wear masks during a flight on Air Force One.

“During transit on today’s trip, masking will be required in line with CDC guidance,” a White House aide told reporters traveling with the president.

The White House said Monday they were “disappointed” by Mizelle’s ruling.