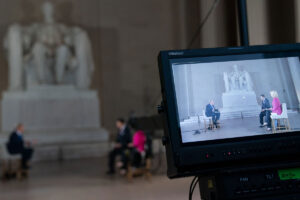 The Democrat’s best, Joe Biden, tried to hit back against the epic ‘American Comeback’ video with an attack ad on President Trump via Twitter.

In the video, Biden uses pop icon Justin Timberlake’s song “Cry Me a River,” along with footage from President Trump’s Lincoln Memorial Fox town hall interview. In the interview, the President says the media has treated him worse than all past-Presidents. A statement that any sane person would agree with.

However, Biden’s ad takes the President’s words completely out of context and tops it off with a ridiculous presumptive lie.

CHECK OUT: Patriot punished by Judge for putting family before stay-at-home order.

During the Lincoln Memorial Fox town hall interview, the President was asked: “Why do you use descriptive words that could be classified as bullying?” when confronting the media.

President Trump answered: “I am greeted with a hostile press the likes of which no president has ever seen.  The closest would be that gentleman right up there.  They always said Lincoln — nobody got treated worse than Lincoln.”

This is an indisputable fact. The mainstream media are almost unanimously in opposition to the President and literally everything they broadcast on TV or post online is against him.

He continued: “And I feel that if I was kind to them, I’d be — I’d be walked off the stage.  I mean, they come at you with the most horrible, horrendous, biased questions.  And you see it.  Ninety-four or ninety-five percent of the press is hostile.”

He concluded: “But the media is — they might as well be in the Democrat Party.”

At no point does he complain, or as the ad implies, cry a river.

Fortunately, 72-percent of Americans don’t trust the mainstream media anymore, citing that it is “fake, false, or deliberately misleading.”

CHECK OUT: Democrat Senator puts Biden before American women despite having an opposite stance in 2018.

Taking the President’s words out of context isn’t something new for the Democrats or mainstream media.

Most recently, the media took misinformation to a new level by saying the President told people to inject disinfectant.

In reality, the President spoke of medical research being undertaken, including injecting disinfectant to fight the coronavirus and the use of sunlight and heat to weaken COVID-19.

At no point did the President advise people to start injecting themselves with disinfectants. Nor did he say drink it.

Yet, it became a big news story and spread across the media, despite it being factually incorrect.

The same will likely happen after Biden’s attack ad on President Trump. An ad that implies the President is more upset about tough questions from the press than the “almost 70,000 dead.”

The President has stood up against the mainstream media and offered prayer for those who have lost loved ones during countless daily briefings. We know Biden’s ad has no grounding in reality but the Democrats and mainstream media will eat it up as the gospel truth.

If this is the first attack ad on the President, we can only imagine how far and how dark Biden’s campaign will go to misinform Americans.

CHECK OUT: Meat will disappear from stores if lockdown continues.