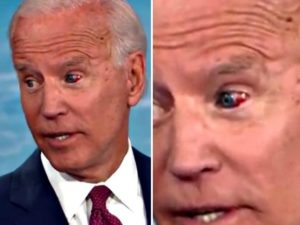 Former Vice President Joe Biden’s left eye filled with blood while he was onstage Wednesday during a CNN town hall on climate change, apparently from a burst vessel.

Biden was in the middle of speaking when his eye appeared to fill with blood, and he seemed not to notice.

Biden, 76, has already been facing questions over his age and health amid a string of verbal gaffes and mixing up details of a dramatic story involving three separate incidents related to Afghanistan. Biden also has a long history of health issues, including multiple aneurysms.

Wednesday night’s event was a seven-hour town hall on climate change, during which ten candidates laid out their plans for climate change. The event began at 5:00 p.m. ET, and Biden did not speak until after 8:00 p.m. ET.