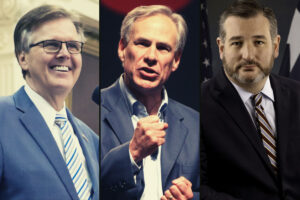 Texas is standing together against the Democrat Judge who sent a Dallas business owner to jail after she refused to apologize for reopening early so that she could feed her kids.

LATEST EVENTS: May 7, Texas Lt. Gov. Dan Patrick has got his checkbook out to pay the $7,000 fine and even volunteered to go under house-arrest so the business owner can get out of jail.

In a tweet, the Governor wrote: “7 days in jail, no bail and a $7K fine is outrageous. No surprise Texans are responding. I’m covering the $7K fine she had to pay and I volunteer to be placed under House Arrest so she can go to work and feed her kids.”

One of the following tweets made a very interesting point: “Liberals raised hell over illegal immigrants being arrested, and separated from their children after they chose to sneak into a different country. Shelley Luther (business owner) got arrested and separated from her children for going to work. Why aren’t they raising hell now?”

Clearly, liberal outrage doesn’t apply to all, just look at the hypocrisy over Joe Biden and Tara Reade.

May 6, after business owner Shelley Luther was sentenced and the news spread, Texas Attorney General Ken Paxton tweeted: “Shelley Luther should immediately be released from jail. Locking her up is a misguided abuse of power, especially considering Dallas County released real criminals to “protect them from COVID-19.” Release her now so she can return to her family.”

In a written statement attached to the tweet, he added: “The trial judge did not need to lock up Shelley Luther. His order is a shameful abuse of judicial discretion, which seems like another political stunt in Dallas. He should release Ms. Luther immediately.”

Ted Cruz, a U.S. Senator for Texas also tweeted: “7 days in jail for cutting hair?? This is NUTS. And government officials don’t get to order citizens to apologize to them for daring to earn a living.”

Texas Governor Greg Abbott said: “I join the Attorney General in disagreeing with the excessive action by the Dallas Judge, putting Shelley Luther in jail for seven days. As I have made clear through prior pronouncements, jailing Texans for non-compliance with executive orders should always be the last available option.”

Is the last available option, getting an apology?

What’s shocking is that, despite the status of those speaking out, Shelley Luther remains in jail.

CHECK OUT: Pelosi and gang standing in way of a real investigation into the coronavirus and China.

If you missed the original story, here’s the timeline leading up to the latest events.

On May 5, she was in front of Judge Eric Moyé, who gave her the choice, apologize, admit wrong-doing, and close the store or face jail time and fines.

She replied: “I have hairstylists that are going hungry because they’d rather feed their kids. So, sir, if you think the law is more important than kids getting fed then please go ahead with your decision but I am not going to shut the salon.”

So not only did Judge Moyé, trial judge of the year in 2014, punish the business owner with jail time, they decided to take money away from the business, employees, and ultimately, keep kids from getting fed.

The irony is that Texas Governor Greg Abbott announced hair salons could re-open May 8, on May 5 which was the same day of her court hearing.