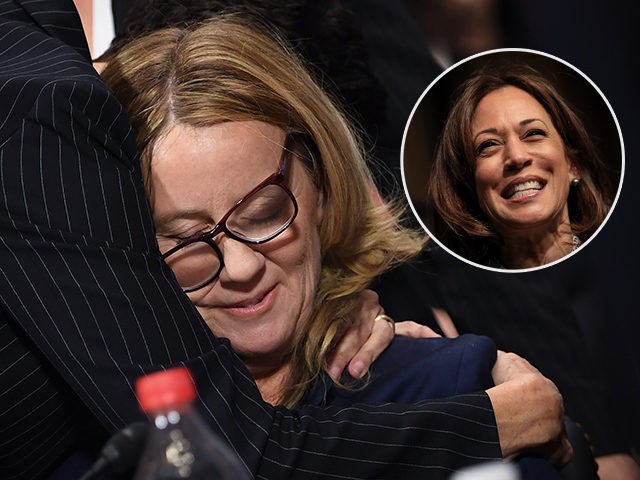 “Her story, spoken while holding back tears, shook Washington and the country. Her courage, in the face of those who wished to silence her, galvanized Americans. And her unfathomable sacrifice, out of a sense of civic duty, shined a spotlight on the way we treat survivors of sexual violence,” Harris wrote of Blasey Ford, who testified about her allegations before the Senate Judiciary Committee last year.

“Christine Blasey Ford’s ambition wasn’t to become a household name or make it onto this list. She had a good life and a successful career — and risked everything to send a warning in a moment of grave consequence,” Harris continued.

During Kavanaugh’s confirmation process, Ford accused Kavanaugh and friend Mike Judge of forcing her into a room and groping her at a house party in Maryland around 1982, an accusation all named witnesses denied any knowledge of.

Kavanaugh himself vigorously denied the accusations, saying “I’ve never sexually assaulted anyone, in high school or otherwise.” The FBI cleared the esteemed judge of any wrongdoing after investigating the claims at the request of then-Sen. Jeff Flake (R-AZ).

Harris also wrote in the profile released Wednesday that Ford brought the issue of sexual assault into the spotlight, which she said: “has been too often ignored.”

“At her core, she is a teacher. And through her courage, she forced the country to reckon with an issue that has too often been ignored and kept in the dark,” the California Democrat said.

Harris, who opposed Kavanaugh’s confirmation, presented a letter to the Senate Judiciary Committee from a woman who identified herself as “Jane Doe,” claiming she too had been sexually assaulted by Kavanaugh. Following Kavanaugh’s confirmation, the mystery woman was identified as Judy Munro-Leighton, who later admitted that she made up the allegations up in a “ploy” for attention. Senate Judiciary Committee Chairman Charles Grassley (R-IA) sent a letter to the Department of Justice and the FBI to request an investigation into Munro-Leighton.