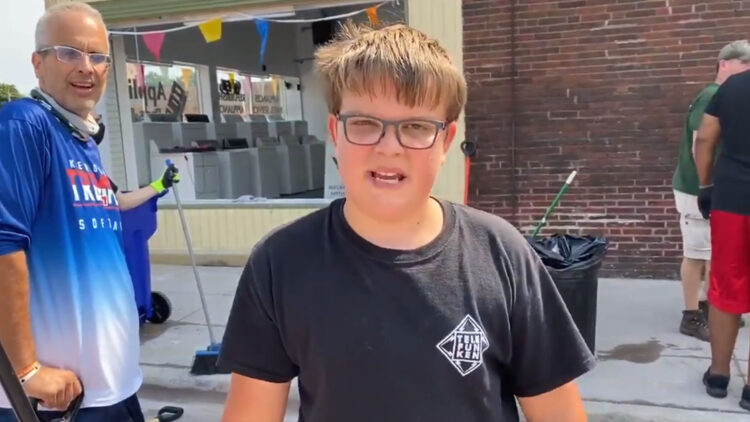 Swipe down to see.

CHECK OUT: Watch the police shooting that led to the Kenosha riots and make up your own mind on whether it was justified.

A lawyer representing Jacob Blake and his family says Blake is paralyzed, has holes in his stomach, damage to his kidneys/liver, has extensive damage to his colon and small intestines, and was shot in the arm. pic.twitter.com/s7oVmahnGi

With those powers, the Mayor:

Two actions that prove at least one elected Democrat isn’t ignorant of events around the country.

National Guardsmen are behind the fencing that was set up today at the Kenosha County Courthouse. Wouldn’t be surprised if this turns into another Portland federal courthouse situation. pic.twitter.com/DdKfjPdS9F

Defund Is Not Enough

The misguided chant of “Defund the Police” has evolved. The Kenosha shooting seems to have pushed the madness over the edge.

Worst still, people are burning the U.S. flag and shouting “Death to America.” Surely, that is a hate crime?

An American flag was just burned outside the Kenosha County Courthouse. One woman screams, “Death to America!” and kicks the fence. pic.twitter.com/vI8U6EOGBv

With all the anarchy and chaos it’s easy to believe there is little hope for the future. And then you see an interview like the one below.

Matthew Stuart, a 15-year-old from Kenosha delivered an intelligent and considerate moment amongst the madness.

When asked why he is out helping he said, “It’s kind of hard to sit at home and watch everyone helping when you can just walk outside and help yourself.”

15-year-old Matthew Stuart was out in Kenosha helping clean up the city today.

“It’s really important ‘cuz there’s a lot of businesses up and down here … It’s very important to the community. Places I even shop at, so I just thought, you really have to come out here,” he said. pic.twitter.com/1BSXZgzOcB

CHECK OUT: Watch a Black Lives Matter mob pull driver from a crash, then circle back to brutally kick him in the head while he’s down.