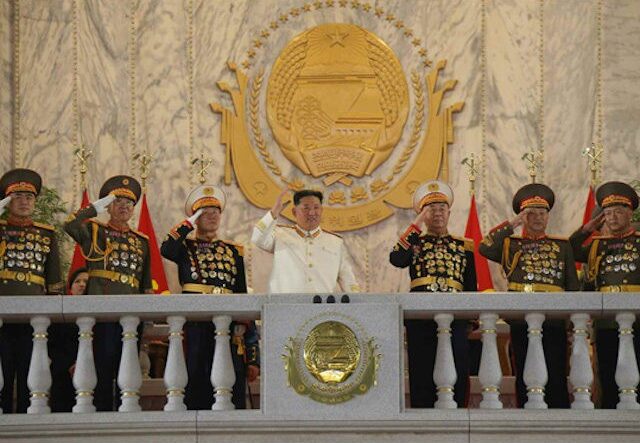 North Korea celebrated the anniversary of the founding of its first military on Monday with a massive military parade featuring “cutting-edge military hardware” and a speech by communist dictator Kim Jong-un in which he warned his soldiers to be “fully prepared” for nuclear war.

Kim’s call for using the country’s illegal nuclear weapons program to “decisively accomplish” any “unexpected second mission” against the enemies of communism follows weeks of rhetorical escalations out of Pyongyang, including sister Kim Yo-jong threatening South Korea with a nuclear strike and the debut of what North Korea called the “Hwasongpho-17,” allegedly a new model of intercontinental ballistic missile (ICBM).

The KPRA was the first entity that resembled an organized armed forces for what was not yet the Democratic People’s Republic of Korea (DPRK) at the time and eventually evolved into the country’s modern military.

North Korea has technically remained at war with South Korea and America since 1950, as the two sides never signed a peace treaty. An armistice agreement ended active hostilities in 1953.

People watch a television screen showing a news broadcast of a military parade held in Pyongyang to commemorate the 90th founding anniversary of the Korean People’s Revolutionary Army, at a railway station in Seoul on April 26, 2022. (JUNG YEON-JE/AFP via Getty Images)

North Korea has not conducted a nuclear weapons test since 2017 and claimed the year after that it had shut down its only known test site, Punggye-ri. Satellite intelligence and eyewitness reports claimed this month, however, that Punggye-ri is experiencing increased government activity, potentially to rehabilitate it after communist officials claimed to destroy it in 2018.

The Monday night parade to honor the Korean People’s Revolutionary Army (KPRA), the country’s armed forces, was among the largest festivities the regime has organized since the Chinese coronavirus pandemic began in late 2019. North Korean authorities claim to have not documented a single case of Chinese coronavirus within its borders despite being surrounded by countries with major outbreaks and Kim Jong-un effusively apologizing for his performance as leader in late 2020.

Images published by North Korea’s national state newspaper Rodong Sinmun show what appear to be tens of thousands of people packed tightly in crowds under a balcony hosting Kim and his top generals. None appear to be wearing sanitary masks or practicing social distance protocol.

Kim Jong-un addressed the crowd to celebrate the alleged capabilities of his military and reassure soldiers that the Kim regime would support them in the event of an escalation of war. Kim also addressed a potential imminent use of nuclear weapons, a task he has more recently tended to leave to sister Kim Yo-jong.

“The fundamental mission of our nuclear forces is to deter a war, but our nukes can never be confined to the single mission of war deterrent even at a time when a situation we are not desirous of at all is created on this land,” Kim said in his speech, according to Rodong Sinmun. “If any forces try to violate the fundamental interests of our state, our nuclear forces will have to decisively accomplish its unexpected second mission.”

“The nuclear forces of our Republic should be fully prepared to fulfil[l] their responsible mission and put their unique deterrent in motion at any time,” Kim was quoted as saying.

Kim also reportedly reaffirmed the nation’s violently enforced worship of communism and thanked the military for its role in the totalitarian regime’s survival. Kim marked ten years in power this month.

“As long as your hearts are pulsating with the precious blood and noble spirit of the revolutionary forerunners,” Kim said in his speech, “and as long as the revolutionary armed forces are always standing at the vanguard of the revolution as the embodiment of the ideology and will of the Workers’ Party of Korea and of the strength of our state and people, the cause of socialism of our own style will be ever-victorious in the future, too.”

The catalog of 150 photos Rodong Sinmun published featured various armored vehicles parading through Pyongyang with a massive arsenal potentially containing nuclear-capable missiles. One of the weapons was allegedly the Hwasongpho-17, according to South Korea’s Yonhap News Agency.

“Columns of strategic missiles entered the square, demonstrating the strong capabilities for executing a war making it possible to react to any warfare in the sky, land, sea and outer space and decisively contain and frustrate the enemy,” the state newspaper detailed.

Rodong Sinmun celebrated the parade, and its weapons, as “inspiring great confidence and eternal treasure of our nation never to be bartered for anything.” Kim, it predictably claimed, received the loudest cheers and praise from those assembled by force for the mandatory communist assembly.

“Hearing his touching speech, all the participants burst into stormy cheers with high national pride of having the peerlessly brilliant commander,” the state newspaper declared, “and the high glory of having the revolutionary armed forces which have devotedly preserved the lineage of the Korean revolution and the idea and cause of the WPK [Workers’ Party of Korea] and reliably guaranteed the existence and development of our state and the happiness of the people.”

“Our invincible country is demonstrating its might as a military power that had access to perfect and powerful deterrence for self-defence under the outstanding guidance of the great Comrade Kim Jong Un,” the propaganda outlet concluded, “who accomplished the historic great cause of completing the nuclear forces by making a long journey of patriotic devotion with a death-defying will in order to make sure that the people would eternally enjoy happiness free from the horrors of war generation after generation.”