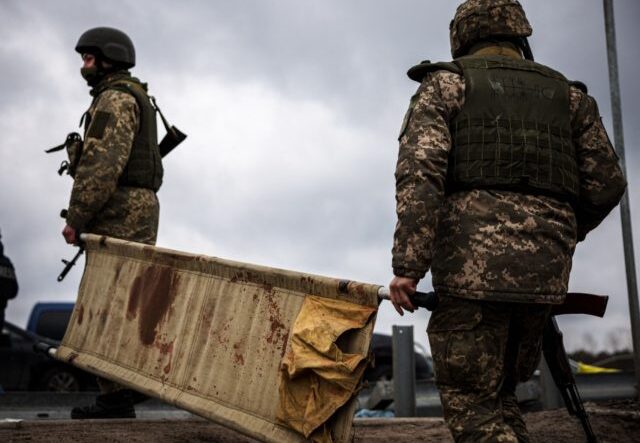 The Ukrainian government is deploying teenage volunteers in the capital city of Kyiv (Kiev) with just “three days training”, according to the British Broadcasting Corporation (BBC).

In an article titled ‘Uni to uniform — Ukraine’s new teenage army recruits’ a correspondent for the publicly-funded broadcaster said he had spoken to a group of volunteers “in their late teens, not long out of school” who told him “that after three days’ basic training they would head for the front line – or very close to it.”

The correspondent, Jeremy Bowen, described the volunteers as a somewhat ragtag band wearing ill-fitting knee pads and, in one case, carrying a yoga mat — but found two of them properly kitted out in military uniforms, body armour, and helmets after catching up with them at a checkpoint days later.

18-year-old economics student Dmytro Kisilenko told the British journalist he was “used to my gun” and had “learned how to shoot and how to act in the battle, also many other things that will be very crucial in the fight with the Russians” as he manned a checkpoint stocked with Molotov cocktails, just a few miles behind the professional soldiery on the frontline.

Kisilenko admitted that “of course deeply in my soul I feel a bit scared, as no one wants to die, even if it’s for your country” and that his father had advised him not to go out of his way to try and be a hero.

Meanwhile, his 19-year-old companion, biology student Maksym Lutsyk, said his few days of training had left him “much more confident”, believing that he now had “enough knowledge in tactics, in martial arts, in tactical medicine and in how to do something on the battlefield.”

Ukraine’s President Volodymyr Zelensky said on Saturday that Russian forces will capture the capital city “only if they kill us all.”

“If that is their goal, let them come,” he declared, admitting that “If they carry out carpet bombings and wipe off the historic memory of the entire region, the history of Kyivan Rus, the history of Europe, they could enter Kyiv,” but that they would “have to live on that land alone, certainly without us.”

Ukraine’s Deputy Prime Minister Iryna Vereschuk has, however, said that towns around Kyiv are among the locations the Ukrainian authorities are seeking to evacuate civilians from via “humanitarian corridors” organised in concert with the Russians — with greater or lesser degrees of success at different times over the course of the conflict so far.