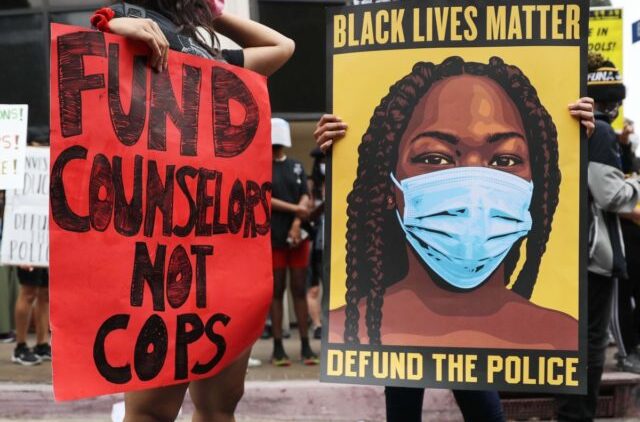 The Los Angeles Unified School District (LAUSD) Board of Education approved a plan Tuesday to cut one-third of the Los Angeles School Police Department (LASPD) force and use the funds to help improve black student achievement.

The cuts came last year after activists protested to “abolish” or “defund” the school police department, which protects students from crime — particularly in predominantly black and Latino areas of the city, where there is more gang activity.

Los Angeles School Police Chief Todd Chamberlain resigned Wednesday after the Los Angeles Unified School District (LAUSD) voted the night before to cut his department’s budget by $25 million, or 35% of the total.

The budget cuts came as a direct result of pressure by Black Lives Matter activists to “abolish the police” or at least “defund the police.”

Chamberlain warned that the proposed cuts would mean officers would not be able to provide overnight security to schools, would have to stop preventing sex trafficking, and would have to end their efforts at “intervention and prevention,” the [Los Angeles] Times added.

Now the plan has been approved, the Times reported Tuesday:

In a major overhaul of the Los Angeles School Police Department, the Board of Education on Tuesday approved a plan that cuts a third of its officers, bans the use of pepper spray on students and diverts funds from the department to improve the education of Black students.

The police overhaul by the Los Angeles Unified School District provides funding for school “climate coaches” who will work to promote positive school culture and address implicit bias at every secondary school. Staff to support and an achievement plan for Black students will also be added.

The approved plan will cut 133 positions: 70 sworn officers, 62 non-sworn officers and 1 support staff member. At the meeting, Chief Leslie Ramirez said the reduction would leave the force with 211 officers.

One school board member, George Mckenna, was quoted by the Times as saying: “The parents expect us to have safe schools. And if you think the police are the problem, I think you got a problem yourself.”

However, he was one of few who dissented.