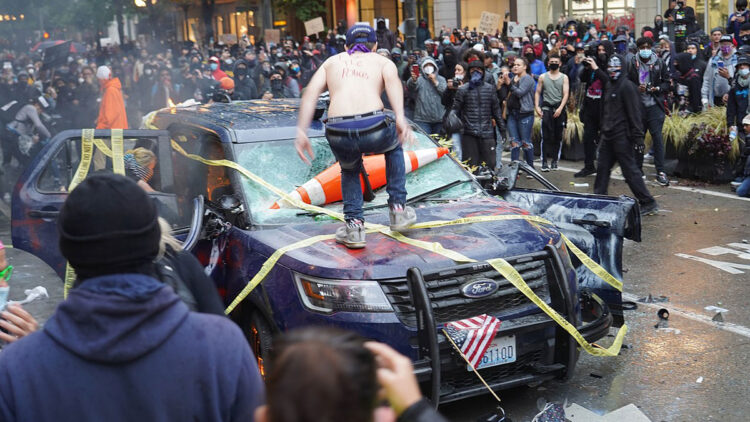 Washington State, as of today will put into action a new set of lockdown restrictions impacting law-abiding citizens, with no mention of protesters.

The headlines from these new rules are:

So, Washington State Governor Jay Inslee is re-pushing rules that say a wedding or funeral of more than 30 people is a risk, but a protest is fine?

CHECK OUT: An IED throwing anarchist gets identified by the riot jacket his grandmother got him as a gift.

Lockdown Restrictions Only For Law-Abiding Citizens

We know the Governor supported the protests during lockdown because he said so in a speech, May 30.

He said: “I fully support the right to free speech and peaceful assembly. I applaud every Washingtonian standing for what they believe in.”

He continued: “If you choose to protest today, please be safe and peaceful.”

That was said while the United States was locked down. There was no mention of social distancing, masks, etc.

Clearly, Gov. Inslee has one rule for law-abiding citizens, willing to follow lockdown rules, and another for protesters.

It's even more comical because he will literally let rioters do whatever they want.

This truly is the stupidest timeline.

CHECK OUT: A Black Lives Matter protester armed with an AK-47 is killed by a motorist during a confrontation.

The only medical report to say protests do not spread COVID-19 also highlighted that it was the fear of violence which lowered the spread.

People literally kept away, so protesters, who are mostly young, just spread it between themselves.

So Gov. Inslee cannot even point to medical experts in his decision to again restrict citizens.

At this point in time, it just seems like certain governors are testing how much dictatorial control they have, and can get away with before law-abiding citizens snap.

And yet the media would have you believe President Trump was the crazy dictator.

CHECK OUT: Out of the Top 20 Most Dangerous Cities in the United States, 18 are run by Democrats. The other two are run by independents. It’s time to move.