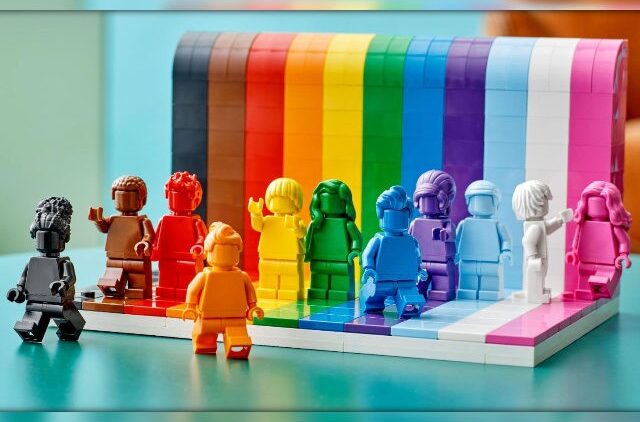 The LEGO toy company has announced the release of its rainbow “Everyone is Awesome” set for kids, just in time for Pride month.

The multicolored set features 11 single-colored, non-gendered figurines that together form a rainbow with black and brown stripes as well as the “transgender flag colors,” LGBTQ Nation reported Thursday..safeframe.googlesyndication.com/safeframe/1-0-38/html/container.html

“The buildable display model is inspired by the iconic rainbow flag which is used as a symbol of love and acceptance by the LGBTQIA+ community,” LEGO said on its website, “and features 11 monochrome minifigures each with its own individual hairstyle and rainbow colour.”

“I wanted to create a model that symbolizes inclusivity and celebrates everyone, no matter how they identify or who they love,” said LEGO set designer Matthew Ashton, a LEGO vice president. “Growing up as an LGBTQ+ kid – being told what I should play with, how I should walk, how I should talk, what I should wear – the message I always got was that somehow I was ‘wrong.’”

“Trying to be someone I wasn’t was exhausting,” he added. “I wish, as a kid, I had looked at the world and thought: ‘This is going to be OK, there’s a place for me.’ I wish I’d seen an inclusive statement that said, ‘Everyone is awesome.’”

The figures in the set are supposed to “express individuality, while remaining ambiguous,” and do not come with pre-painted faces or clothes. The only distinguishing features are their different hairstyles and colors.

Ashton said the purple figure, however, is supposed to be “a clear nod to all the fabulous drag queens out there.”