CORRUPTION: Looters And Rioters Released Behind Attorney General’s Back 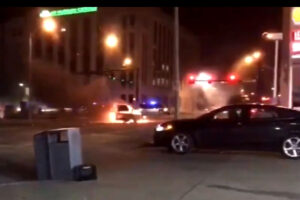 MISSOURI: More than 30 looters and rioters who were arrested for burglaries, property damage, assault, stealing, unlawful use of a weapon, and more, have been released from jail without any charges.

Amazingly, this includes the protesters arrested Monday night in the city of St. Louis, where four police officers were shot and wounded, and retired police captain, David Dorn, 77, was killed protecting a pawn shop.

During that one Monday night, there was also the following crimes:

Yet, out of only 36 arrests, over 30 have been released without being charged.

Missouri Attorney General Eric Schmitt (R) released a statement late Wednesday writing: “In a stunning development, our office has learned that every single one of the St. Louis looters and rioters arrested were released back onto the streets by local prosecutor Kim Gardner.”

The statement from Schmitt came on his official Twitter page and it accompanied a horrifying piece of video showing absolute carnage on the streets. See below:

So all that carnage results in only two issued summons?

Worse Than Looters And Rioters

Kimberly Gardner (D) is the Circuit Attorney for the City of St. Louis, Missouri. During her election campaign in 2016, she was at least part-funded by mega-donor George Soros. A man who infamously funded activists during the Ferguson protests.

The ad was funded by Soros’ Safety and Justice Committee. In the ad, it said that Gardner will focus on mental health care for non-violent offenders, increased public accountability, and to crack down on gang violence. It must have missed out the part where she’ll actively release violent rioters.

The Washington Times wrote in 2015: “In all, Mr. Soros gave at least $33 million in one year to support already-established groups that emboldened the grass-roots, on-the-ground activists in Ferguson, according to the most recent tax filings of his nonprofit Open Society Foundations.”

When Gardner accepted the money from Soros, the president of the St. Louis Police Officers’ Association said: “It’s kind of insulting to our members, if I’m being completely honest with you. Out all races, the circuit attorney race probably affects the police the most and for her to take money from out of state activists is a problem for us.”

It’s not known whether Soros is backing Gardner’s re-election campaign, however, Soros is well known for supporting candidates who’ll push liberal bail reform and sentencing platforms. Based on this most recent evidence, she could again be his perfect candidate.