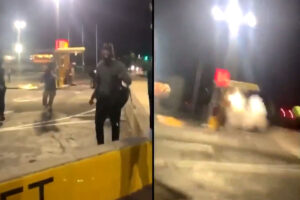 Reports are coming in from Philadelphia saying that looters have upgraded from running into stores and stealing to targeting ATMs with explosives. Don’t believe us, scroll to the bottom to see a video.

According to officials, ten ATM machines across the city were attacked overnight. With convenience stores and mini-markets being targeted. The police are after those involved and seeking help from the community.

Police have described what is happening, saying that the criminals are rushing to a location, setting off an explosive before returning for the money in the machine.

The police have said that other incidents include looters taking ATMs from inside mini-marts, with one such incident occurring at 11 pm near West Rockland Street. It also happened at a mini-mart at West Hunting Park.

CHECK OUT: Proof the riots are premeditated and well financed.

Getting Away With ATMs

The police have admitted than an unknown amount of money has been taken and that some criminals are simply putting ATMs into their cars and driving off after using explosives.

Watch the video below to see criminals in action.

CHECK OUT: AOC tells looters how to hide identity and protect themselves with heat resistant gloves. It sounds like inciting violence to us.