Mayor Asks For Help With Graffiti While Antifa Runs The City 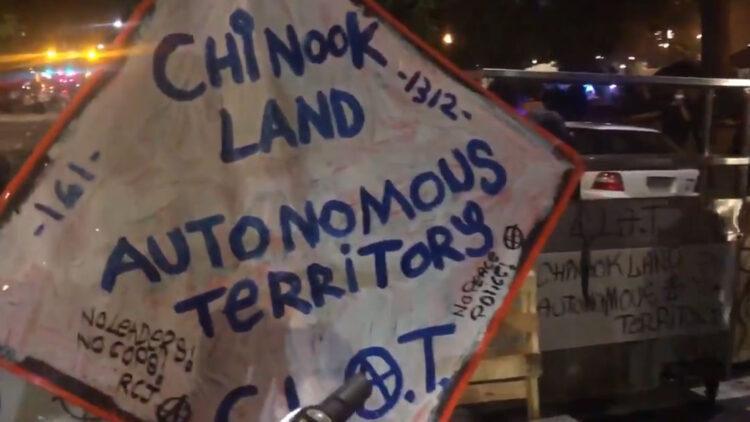 President Trump said on Monday: “Portland was totally out of control, and they went in (federal officers), and I guess we have many people right now in jail and we very much quelled it, and if it starts again, we’ll quell it again very easily.”

The anarchy over the weekend resulted in Donavan La Bella, 26, being shot in the head with an impact round by federal officers. This accident left La Bella with skull fractures and facial injuries.

Yet, the anarchy continued.

The Antifa Events That Followed

Wednesday, July 15, during the early hours the police tried to remove barricades but Antifa returned. Throwing glass bottles and using laser pointers to disperse the police.

According to reports, federal officers then used tear gas and other non-lethal munitions to counter Antifa.

The Chinook Land Autonomous Territory (CHAT) remains and should be Mayor Ted Wheeler’s biggest concern. After all, Seattle’s Capitol Hill Autonomous Zone had a 525-percent spike in crime while it was active.

However, Mayor Wheeler is more concerned by something else.

Wheeler Not Focused On Antifa

On July 15, Mayor Wheeler tweeted: “Today the Acting Secretary of Homeland Security asked to speak with me about demonstration activity in Portland. He expressed his concern about ongoing violence and asked how his agency can help.”

After months of letting anarchy run downtown Portland, with Homeland Security and federal officers available to help, the Mayor told them to clean graffiti.

The Mayor continued: “I told the Acting Secretary that my biggest immediate concern is the violence federal officers brought to our streets in recent days, and the life-threatening tactics his agents use. We do not need or want their help.”

Mayor Wheeler even stated that: “Our goal is to end these violent demonstrations quickly and safely.”

Violent federal officers? Quickly and safely? These are just some of the responses the Mayor received.

One local resident tweeted: “Ted, you have continued to allow the so-called “peaceful protests” to go on for 45 days with the destruction of businesses in the downtown area, innocent people getting injured, and people like myself avoiding the downtown area because of these people.”

Another tweeted: “”Quickly and safely.” We’re coming up on 50 days straight of this city being held hostage by a couple of hundred extremists and their cheerleaders. Longer than anywhere else. Appeasement isn’t working.”

And finally: “Wow that’s rich!! You’ve done nothing to keep our city or the people safe. Have you asked Antifa to clean up the Graffiti?? Or how about the officers have you thanked them for trying to do what they can while being harassed and hurt?”

It’s no wonder Democrat-run cities are 18-out-of-20 on the most dangerous list.