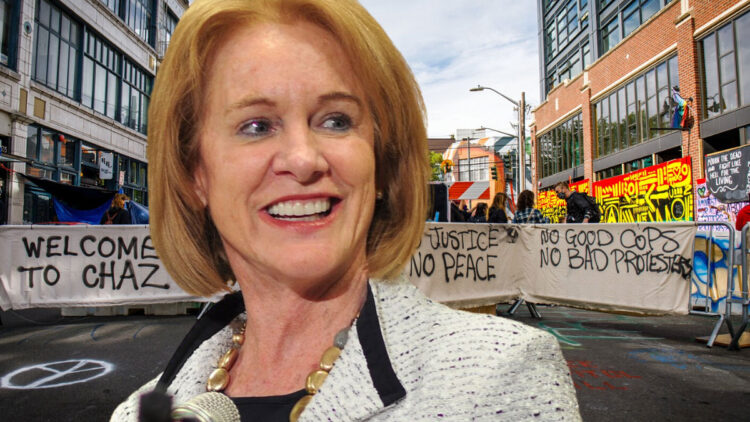 A Democrat’s tolerance has no limits when it comes to “peaceful protests.” If only they were as tolerant with citizens re-opening businesses or attending church during COVID-19 lockdowns.

CHECK OUT: The media need to stop pushing the peaceful protesters’ narrative because they’re armed and using human roadblocks to cause terror. Watch now.

Throughout CHAZ’s existence, Mayor Jenny Durkan constantly praised the peaceful community nature in the zone. She did everything possible to relate to the protesters-come-warzone-anarchists, even saying that those in the zone will have a “summer of love,” before backpedaling over security fears.

Ironically it was Mayor Durkan who finally saw sense and issued an executive order for CHAZ to be shut down on June 30. Giving occupants time to leave the area before police would move in.

Upon the executive order, Seattle Police Chief Carmen Best said in a statement: “This order, and our police response, comes after weeks of violence in and around the Capitol Hill Occupied Protest zone, including four shootings, resulting in multiple injuries and the deaths of two teenagers. ”

In total, six people were shot in and around the Capitol Hill Autonomous Zone. One observant Twitter user wrote: “More black men have been killed by CHAZ/CHOP security in 10 days then the entire Seattle Police Department for all of 2019.”

After the executive order, Mayor Durkan went to Twitter and wrote: “For weeks, we have had incredibly peaceful demonstrations on Capitol Hill. Thousands of individuals came together to call for change, and their message has been heard loud and clear: Black Lives Matter. We must continue to live up to this moment in our nation’s history.”

Regardless of the Mayor’s attempted positive spin, Twitter users made their feelings clear:

The reality is, Mayor Jenny Durkan wasn’t alone in supporting the Capitol Hill Autonomous Zone. Everyone who backed it and let it continue should be held accountable for the crimes committed between June 8 and July 1.