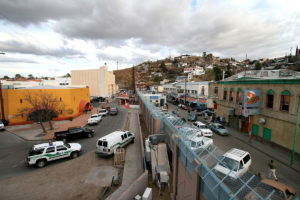 Mexican protesters have blocked southbound lanes at the crossing between the twin border cities of Nogales. The protests are directed at the Mexican government for not screening those heading into their country. It is an ironic twist considering the number of unscreened Mexican’s who head into the United States yearly.

These protests came a week after the United States and Mexico agreed to ban all non-essential travel between countries. The travel ban isn’t surprising but Mexico’s changing stance on border control since the United States became a COVID-19 coronavirus threat is.

The protests occurred just after midday on Wednesday, March 26th. The protesters parked two trucks and blocked the lanes leading into Mexico, they wore masks and waved signs that read ‘Stay Home’. The lanes heading into the United States from Mexico remained open and unaffected, unsurprisingly.

The protest group called ‘Sonorans for Health and Life’ are demanding the Mexican President Andrés Manuel López Obrador up his response to the pandemic with screenings on all inbound traffic. During the blockade, U.S. Customs and Border Protection officials redirected traffic to Mariposa. The protest and disruption lasted over four hours and could easily happen again.

The concern for these Mexican citizens is understandable, especially as President Lopez Obrador only banned large gatherings across Mexico on the 24th. This was a massive change in direction for the country, considering the Mexican President posted a video urging people to go out and bolster the economy two days previously.

One thing is certain, the COVID-19 coronavirus is forcing nations to re-think everything. None more apparent than Mexico’s opinion on border control.

Mexico looking out for themselves

Keeping a nation’s border safe should have been something we all agreed on but couldn’t before the coronavirus. Interestingly, Mexico’s perspective has changed, and hopefully, others will see the positives of putting their nation first in the future.

For decades the United States has been bombarded with illegal immigrants from Mexico. The damage didn’t matter to Mexico, there was nothing they could do — until the movement of people endangered their country.

“IF IT WERE TECHNICALLY NECESSARY TO CONSIDER MECHANISMS OF RESTRICTION OR STRONGER SURVEILLANCE WE WOULD HAVE TO TAKE INTO ACCOUNT NOT THAT MEXICO WOULD BRING THE VIRUS TO THE UNITED STATES, RATHER THAT THE UNITED STATES COULD BRING IT HERE”

We don’t know what a “mechanism of restriction” is, nor do we know if they’re just words to keep a nation calm. Our hope is that Mexico has been holding back and that they can stop the virus crossing because it would be proof that the nation can stop illegal immigrants from crossing too.

CHECK OUT: New Jersey man charged with making a terrorist threat after coughing with intent.

It took a pandemic to change minds

It is tragic that it needed our southern states to pose a threat to Mexico before they would be proactive in the decade-old problem of immigration. Ultimately, if the coronavirus can get our nations to work together to solve the border problem, the skies are the limits for President Trump’s wall project.

“FOR BOTH COUNTRIES, IT DOESN’T BENEFIT US TO HAVE COMPLETELY OPEN BORDERS,” HE SAID. “WE SEE IT NOW WITH THE VIRUS, AND HOPEFULLY WE CAN WORK CLOSELY TOGETHER BECAUSE IN HEALTH ISSUES, POLITICAL PARTIES AND BORDERS AREN’T IMPORTANT.”

Considering many people have ridiculed President Trump’s stance that Mexico will be paying for the wall, this shift in opinion could be the catalyst for a deal. There is an awful lot for Mexico to protect, especially as scientists still aren’t certain how the virus spreads.

Right now the message is to wash hands, distance yourself, and don’t touch people. Yet, in many of Mexico’s biggest economic cities, with full factories and high temperatures, identifying and controlling the virus will be challenging.

There have been 585 cases of the coronavirus in Mexico, with eight deaths and those numbers climb daily. Comparing this to the United States, where there are currently 82,100 confirmed cases of COVID-19 and 1,195 deaths according to CNN.

The virus is yet to fully impact Mexico and its economy, so the fear of being infected by people traveling from the United States could end up pushing our southern neighbor to pay for and build the wall quickly. Either that or gamble with their nation’s future.