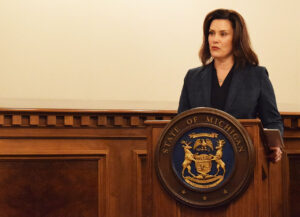 Sheriff Brian BeGole of Shiawassee County, Michigan, released a press release stating that his department would not enforce the Governor’s lockdown executive orders.

In the statement, he wrote: “With limited resources, staffing and facilities, our priority focus will be on enforcing duly passed laws for the protection of Shiawassee County citizens.”

The word ‘duly’ means: In accordance with what is required or appropriate; following proper procedure or arrangement.

So, the Sheriff is calling the Governor’s executive order inappropriate and outside of proper procedure.

He is not the first Sheriff to have issues with a Governor’s new normal (America under executive orders). Sheriff Chad Bianco, of Riverside County, California, said: “Any new normal is a direct attack on the basic rights.”

Sheriff BeGole continued in his press release: “I have decided, within my authority, that our office cannot and will not divert our primary resources and efforts towards enforcement of Governor Whitmer’s executive orders.”

CHECK OUT: Fear of COVID-19 crime wave is driving New Yorkers to their Second Amendment rights.

A day after the Sheriff’s press release, The Governor of Michigan, Gretchen Whitmer was asked about business owners and residents doubting her ability to enforce her executive orders.

In a sharp response, the Governor said: “These executive orders are not a suggestion. They’re not optional. They’re not helpful hints.”

It’s a reaction to Michigan’s defiance. An accumulation of what the Sheriff of Shiawassee County said, what protestors have done, and to businesses reopening regardless of the lockdown executive orders.

Gov. Whitmer said she understood how frustrating the situation is but expected people to follow the law. The issue for the Governor is that people aren’t, and the police aren’t going to enforce it.

CHECK OUT: Governor suspends license of restaurant that opened on Mother’s Day.

The Folk Hero In Michigan

The 77-year-old, who refused to close his shop despite repeated orders has become a Michigan folk hero amongst those who demand the state’s lockdown executive orders be receded.

On May 11, Shiawassee County Judge Matthew Stewart denied the state’s request to sign a restraining order against the barber. A decision that was met with cheers from his supporters gathered outside.

The Judge will instead schedule a hearing, something that Manke’s attorneys have requested. A spokesman said: “The Court wanted to provide Mr. Manke with an opportunity for a hearing on the request for an injunction, despite the clear public health dangers that continued operation of his business creates.”

It’s not all good news for the barber, Karl Manke. He still faces charges for violating Gov. Gretchen Whitmer’s stay home order and faces more than $1,000 in fines.

However, none of this seems to have phased Manke, who said: “I’m gonna stay open til Jesus comes.”

CHECK OUT: Fact checking optional at “60 Minutes” as their Mike Pompeo conspiracy lie gets debunked.