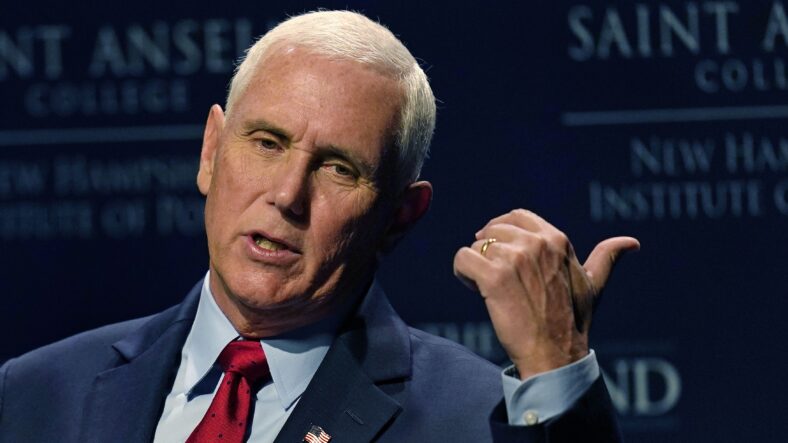 Former Vice President Mike Pence defended the rank and file of the FBI from criticism by those decrying the search warrant performed at the Mar-a-Lago residence of former President Donald Trump.

Pence made the comments while giving a speech at an event at St. Anselm College in Manchester, New Hampshire, on Wednesday. Pence expressed concern at the possibility that the Biden administration was politicizing the FBI in order to seek its own political agenda before defending the bureau.

“I also want to remind my fellow Republicans, we can hold the attorney general accountable for the decision he made without attacking the rank-and-file law enforcement personnel at the FBI,” he said at the Politics & Eggs event.

“The Republican Party is the party of law and order,” Pence added. “Our party stands with the men and women who stand on the thin blue line at the federal and state and local level, and these attacks on the FBI must stop. Calls to defund the FBI are just as wrong as calls to defund the police.”Don’t miss out on content from Dave Rubin free of big tech censorship. Listen to The Rubin Report now.

On Thursday, a man tried to breach the FBI offices in Cincinnati, Ohio, with a nail gun before fleeing. Police later tried to apprehend the man after an hours-long standoff that ended in a shootout where the man died. He was later identified as Ricky Walter Shiffer, who had been present at the U.S. Capitol during the Jan. 6 attack.https://9e4264bc28ddd17b7a6ad194227ee8a8.safeframe.googlesyndication.com/safeframe/1-0-38/html/container.html

Pence also made headlines when he said he would consider testifying before the House Select Committee investigating the Jan. 6 rioting. Pence had been the target for some of the rioters who believed he had the constitutional power to reject the official results of the 2020 presidential election.

“It would be unprecedented in history for a vice president to be summoned to testify on Capitol Hill, but as I said, I don’t want to prejudge,” he said during the speech. “If ever any formal invitation was rendered to us, we’d give it due consideration.”

Some saw the comments as a part of a possible Pence campaign for the Republican presidential nomination in 2024.