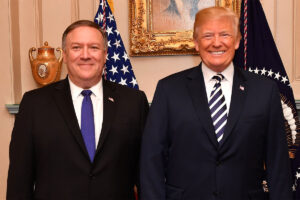 Secretary of State Mike Pompeo has been accused by 60 Minutes of attempting to resurrect, what’s allegedly a debunked theory, that COVID-19 is man-made.

Whatever you believe, news should report the facts, but it’s not always easy with so many versions of the truth available. However, five-minutes of research could have stopped 60 Minutes from this mistake, that is if it was a mistake.

May 11, in a tweet that linked to a story regarding the defunding of a Wuhan lab, 60 Minutes wrote: “As the U.S. took the lead for illness and death from coronavirus, the White House moved the focus to the Chinese government. Last Sunday, Secretary of State Mike Pompeo attempted to resurrect a debunked theory that the virus was man-made in China.”

The U.S. government has been talking about China’s actions since the pandemic started, so 60 Minutes is wrong immediately. Yet, this isn’t the end of their fake news.

CHECK OUT: All of America should have chills over the FBI’s deep state coup attempt.

May 3, ABC News interviews Mike Pompeo, he says: “I can tell you that there is a significant amount of evidence that this came from that laboratory in Wuhan.”

The Secretary of State does not say the virus is man-made.

April 30, the Office of the Director of National Intelligence (ODNI) wrote in a press release: “The Intelligence Community also concurs with the wide scientific consensus that the COVID-19 virus was not manmade or genetically modified.”

Mike Pompeo said regarding the intelligence: “I’ve seen their analysis. I’ve seen the summary that you saw that was released publicly. I have no reason to doubt that is accurate.”

Plus, if anyone still wasn’t clear on what Mike Pompeo thought, the Secretary of State said this to Chris Stigall: “We haven’t seen any evidence that this was a biological weapons effort that led to this. Indeed, the Intelligence Community concluded that this was…not a man-made virus. Fair enough.”

Yet, 60 Minutes managed to ignore all of that, and craft an inaccurate, misleading tweet that leads to an article headlined: “Trump Administration Cuts Funding For Coronavirus Researcher, Jeopardizing Possible COVID-19 Cure.”

The article which the 60 Minutes tweet links to is about the National Institute of Health (NIH) cutting a grant to EcoHealth Alliance. A New York company that splits its grants into subgrants and distributes around the world. Including to the Wuhan Institute of Virology where the COVID-19 originated from.

Some might wonder why the President would do such a thing? Others will wonder how that article has anything to do with the tweet.

For 60 Minutes, fact-checking didn’t seem to matter. They wanted to connect the words “debunked” with a significant member of President Trump’s administration so that they could put together the tweet and link to suit their bias.

The question is, as an American taxpayer do you want your money to go to the Wuhan lab that possibly leaked COVID-19? Whether accidentally or deliberately?