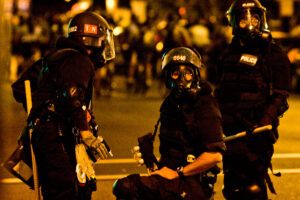 The riots in Minnesota continued for the third night in a row, and finally, after the 3rd Minneapolis Police Precinct was set ablaze, Gov. Tim Walz decided to act and send in the National Guard.

It’s the right decision but it should have been made earlier, especially after it is alleged one looter was shot and killed by a store owner protecting their business.

Over five-hundred National Guard soldiers were mobilized. Being sent to several locations, including banks, stores, and pharmacies around Minneapolis.

In a tweet, the National Guard said: “We have activated more than 500 soldiers to St. Paul, Minneapolis and surrounding communities. Our mission is to protect life, preserve property, and the right to peacefully demonstrate. A key objective is to ensure fire departments are able to respond to calls.”

After calling in the National Guard, Gov. Walz said: “It is time to rebuild. Rebuild the city, rebuild our justice system and rebuild the relationship between law enforcement and those they’re charged to protect.”

Again, this is something that should have happened at least a day ago.

CHECK OUT: Watch MSNBC get caught out in a lie as passerby calls out reporter’s camera crew for not wearing a mask during on-air segment judging people for not wearing masks.

The riots, which began as protests on May 25, sought justice for George Floyd, a Minnesota man who was killed by unacceptable and disturbing police brutality. Yet, the protests turned violent after the police attempted to disperse the crowd with tear gas and other projectiles.

Since then, the riots have included looting, violence against other citizens, emergency services, and businesses. Additionally, protests have occurred in New York City, Denver, and other states, all in the name of George Floyd.

To clarify, peaceful protests do continue in Minneapolis. Not everyone rioted, and those protesting peacefully have every right to do so. Yet, there’s a big difference between protesting and rioting.

For instance: Chanting “I can’t breathe,” the infamous last words of George Floyd while looting and setting fires does not justify the criminal actions. Buildings set-on-fire include an AutoZone, a Wendy’s, a cellphone store, an affordable housing building, and now a police station.

This fact is completely lost on celebrity Sarah Silverman, who compares what’s happening in Minneapolis to the protests in Michigan. In Michigan, protesters stood and called for the state to be reopened. There was no looting, no fires, and no need for the National Guard.

At around 9 pm on Wednesday, May 27, outside the Cadillac Pawn and Jewelry store on Lake St. in Minneapolis, a man was shot. It is alleged that the victim was a looter and that the shooter was the business owner trying to protect their store.

This has not yet been confirmed by the police.

Officers attempted to resuscitate the victim, but after being taken to Hennepin County Medical Center, they died. To confirm, a man has been arrested and taken into custody.

The pawn and jewelry store is roughly ten blocks west from the 3rd Minneapolis Police Precinct, the location where the riots began. The rioting and looting did spread across Lake St., with stores being looted and attacked throughout.

CHECK OUT: Twitter’s fact-checking against the President already proven wrong.