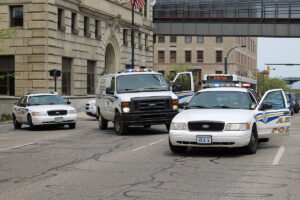 The Chicago Mayor has taken enforcing the state’s stay-at-home order to a whole new level. In a city with ridiculous crime stats, she’s using the police to lockdown churches.

That’s right, Mayor Lori Lightfoot has police blocking off streets and stopping people who want to go and worship. Plus, many churches have been hit with citations.

The issue for the Mayor is that too many people want to go to church during this time of need. Which means churches are having gatherings over the permitted ten. Therefore, the Mayor is clamping down.

The Chicago Police Department said in a statement: “Officers will continue to monitor any possible large gatherings in their districts and issue any citations where necessary.”

Some of the churches hit by the Mayor’s actions include Logos Baptist Ministries and the Elim Romanian Pentecostal Church. Like many churches around America, they have opened a federal lawsuit against their state.

The lawsuit states that Illinois Gov. J.B. Pritzker’s (D) executive order is unconstitutional and unfairly discriminating against churches by restricting the number of people who can worship, while other premises remain open, with more people present and without a restriction.

In an interview, Harry Mihet, an attorney representing the churches compared the Mayors and police actions as mob-like.

According to the attorney, the city told residents impacted by the roadblocks that they were inconvenienced by the church. Clearly projecting the blame.

He said: “What the mayor was doing here, was that she manufactured a crisis and scapegoated the churches with the intent—we believe—of inciting hatred and violence against these families that just want to worship their God.”

Cristian Ionescu, the pastor from one of the churches that violated the state’s stay-at-home order believes the Mayor has militarized the city police department and is harassing his church. He said: “I think this is vindictive.”

The Chicago Police Department wrote in a statement that they want residents to stay home and practice social distancing. Yet, where was this enforcement when the Mayor violated the stay-at-home order to visit a hairdresser in early April?

Mayor Lori Lightfoot said: “I’m the public face of this city and you know, I’m a person who takes personal hygiene very seriously and I felt like I needed to have a haircut. So I got a haircut.”

The Mayor had even told people to stay-at-home and not get a haircut before getting her own haircut. The double-standards aren’t subtle anymore.