WATCH: Mob Hurls Abuse At Shopper For Not Wearing A Mask 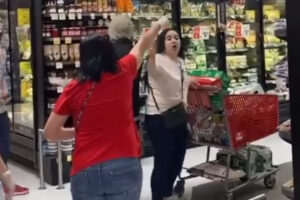 A video uploaded to Facebook shows angry shoppers screaming profanity at a woman for not wearing a mask in a New York grocery store.

Granted, under Gov. Andrew Cuomo’s ‘everyone must wear a mask’ rule the shopper should have been stopped from entry at the ShopRite grocery store and perhaps offered a mask, or if needs must, told she would not be served at the checkout.

Instead, the shopper got torrents of abuse from others whose default response to seeing someone without a mask was to become an angry mob and start screaming at the top of their lungs.

The irony is that one man pulled down his mask to shout abuse while everyone else completely ignored social distancing when chasing her out of the store. Surely if they were scared of catching something from the shopper they wouldn’t be following her?

Not Wearing A Mask

Christine Lynn, the person who posted to Facebook said a friend had taken the video and sent it to her. In the post on Facebook she wrote: “What happens in Staten Island when you don’t wear a mask at ShopRite!”

TMZ seemed to support the shopper’s reactions, writing that ‘Staten Island doesn’t play. For the record, NY Gov. Cuomo ordered face masks to be worn in public in all places where social distancing is not possible.’

It’s understandable that people in New York are on high alert, it is the epicentre of the COVID-19 virus in the United States yet there’s no reason to be so hostile. Clearly fear and panic has taken over.

Christine Lynn posted on Facebook: “I get ppl are anxious NO reason to act the way some of them are…especially guy following her to scream at her and call her a pig!”

The woman who wasn’t wearing a mask is a victim, but so are the people shouting the abuse. People have been driven to this point because of the pandemic, the lockdown, and the economy. It’s vital that people don’t support this behavior otherwise it will get much worse before it gets better.

CHECK OUT: Joe Biden says young black man is not black because he doesn’t know who to vote for in 2020 election.