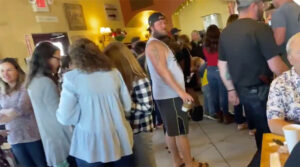 Cookies and Crème, a restaurant in Colorado ignored the states restrictions and reopened for Mother’s Day brunch.

Dozens of maskless diners attended. Many of whom waited for hours before being seated in a dining room that was packed, clearly ignoring the 6ft social distancing rules.

To top it off, the store proudly tweeted about their defiance of the governor’s safer-at-home order.

A manager at the store said the restaurant did “what the government isn’t doing — opening.” They even called the customers “patriots.”

Clearly people in Colorado are desperate to get back to their favorite places to eat-out and are tired of the restrictions.

CHECK OUT: Religious freedom and America’s fightback against unjust decisions.

Under Colorado’s safer-at-home order, restaurants like Cookies & Creme are only allowed to offer delivery and take-out services during the lockdown.

The Tri-County Health Department responded in a Station CBS4 interview: “We are disappointed that Cookies and Crème has decided to ignore the Governor’s Safer at Home order and open up today with no attention to social distancing.”

They continued: “As the entity charged with enforcing the Governor’s statewide Safer at Home Public Health Order, we will follow up with this restaurant to ensure that they, like other restaurants in the county, take appropriate steps to protect the public health, by limiting service to curbside and take-out service.”

Clearly, there is a punishment incoming for Cookies and Crème.

CHECK OUT: Another Democrat thinks Joe Biden’s sexual assault allegations have been put to rest by his TV denial.

Many people tweeted in response to the restaurant’s opening.

The most extreme was Dean Obeidallah. A left-leaning columnist for The Daily Beast and CNN Opinion. He tweeted: “The people who went to Castle Rock today and didn’t wear masks or follow social distancing rules 100% know they will get people sick. If they infect anyone who dies, they should be charged with MANSLAUGHTER! No one is above the law- not even Trump supporters!”

That’s right, manslaughter for all who attended. Plus an immediate belief that they were all President Trump supporters.

It really is a lose-lose scenario for Colorado’s Gov. Jared Polis but at least some mother’s had a good day out.