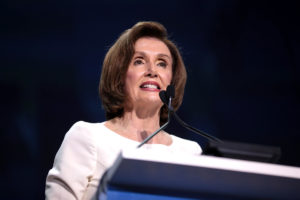 Nancy Pelosi, the Speaker of the United States House of Representatives is again pointing her finger of blame at the President.

Pelosi, during a conference call with her caucus, said: “The more misrepresentations he (the President) puts out there, the more it obscures the truth.”

We agree. The more President Trump speaks about getting the nation back to normal, the deals and decisions he’s made to make citizens safer during a unique moment in modern history are obscuring the truth.

Pelosi continued to tell her Democrat audience: “We have to insist upon the truth — what they’re saying is not knowledge, is not facts, is not real.”

During the call, the Speaker slammed the President for many things, calling his actions out as “almost sinful,” but despite wanting the facts, she seems oblivious to them.

The biggest reason America started behind the curve in its fight against COVID-19 is because Nancy Pelosi and Co. distracted the nation, and media, by chasing an impeachment that now, in hindsight has clearly cost many thousands of lives.

We really do hope President Trump uses this truth during his re-election campaign.

CHECK OUT: The Daily Rant with Steve Sanchez as he asks, is this the hardest decision for President Trump?

The timeline of events

January 11, China announces the first death in Wuhan. Four days later, on January 15, Nancy Pelosi holds a vote to send articles of impeachment to the Senate, and celebrates the result with a signing ceremony.

January 21, the first person with COVID-19 arrives in the United States from Wuhan. Two days later, on January 23, the first arguments are heard for impeaching the President.

January 30, The World Health Organization declares an international emergency over COVID-19. The following day, on January 31, The Senate votes on whether to allow more witnesses and documents in the trial.

February 2, Someone dies in the Philippines from COVID-19. The first death outside of China. The following day, on February 3, the impeachment trial has its closing arguments.

February 4, President Trump talks about the COVID-19 outbreak in his State of the Union address and Nancy Pelosi rips it up, calling it a “pack of lies.”

February 5, The Senate votes to acquit the President of impeachment. On this day, Democrats start looking into the severity of COVID-19.

This timeline proves undeniably that the Democrats weren’t interested in COVID-19 until it was already too late.

CHECK OUT: It’s time to get out of Communist China and Japan’s stimulus shows the way.

If the Democrats had focused on COVID-19 as much as they did the impeachment, the United States would have been able to react sooner.

Instead, the President spent a week-in-a-whirlwind. From reacting to the World Health Organization’s international emergency on January 30, to having his COVID-19 concerns torn and labeled as lies by Nancy Pelosi.

Despite this timeline being available for all to see, Nancy Pelosi still manages to be outraged by the President’s handling of COVID-19.

This time, her anger is because she thinks the President will force the nation back to work, putting lives at risk on May 1. However, the President has already said he’ll listen to others from different sectors, including his medical experts Dr. Fauci and Dr. Birx before making a decision.

Pelosi’s blame game is non-stop. She has already blamed the President for not having enough personal protection equipment and ventilators, but it was President Obama who depleted those supplies and never replenished. The President, after weeks of fighting 3M and General Motors, finally has deals in place, and perhaps those deals could have been done quicker if the United States wasn’t reacting late to a global pandemic where every nation is after the same equipment.

No matter which way the COVID-19 pandemic is looked at, the delays caused by the impeachment have cost lives and what’s worse is that we don’t believe Pelosi is done playing this blame game.

We predict Pelosi will blame the President for not delivering a stimulus to small businesses quickly enough next. A stimulus package she ridiculed and helped hold to ransom until it gave $350-million to immigrants and refugees.

If President Trump’s actions are “almost sinful,” we don’t have the words for what Nancy Pelosi’s actions are.

CHECK OUT: The FDA are playing roulette with risky antibody tests.