NATIONAL GUARD: The Debate Over Kneeling In Front Of Protesters 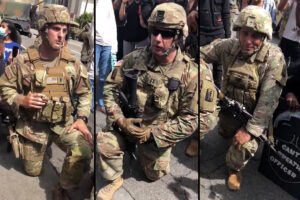 There seems to be an epidemic where police officers and soldiers are kneeling before protesters. Whether you believe it is right or wrong, it does set a precedent.

It happened most recently on Sunset Boulevard in Hollywood, California. Actress Keke Palmer stood in front of a National Guardsman and repeatedly asked him to walk with the protest. It’s a peaceful enough request, but the soldier could not leave his post due to his orders.

The crowd then started to shout “take a knee,” which is a reference to Colin Kaepernick, a former-quarterback in the NFL who famously would take a knee during the national anthem. Some followed his lead and the left loved it. The right felt it was disrespectful to veterans and the country.

Whatever your opinion, pressuring soldiers who are there to protect the innocent is wrong. It puts them in a position where not complying could result in action that contradicts their purpose on the streets.

A better solution would be for off-duty soldiers and officers to join the protests in solidarity. If people want to protest it is their right. The question is whether political gestures in uniform creates issues.

In the video below, you can see that the protesters put pressure on the soldiers to comply by saying President Trump is trying to incite a race war. Additionally, you can hear the actress say kneeling is not enough. A remark that is shocking, considering that many people only kneel for their religious beliefs.

Like with most things, the decision to kneel has left America divided. One person however came up with an interesting point.

Columnist, and former soldier, Kurt Schlicter, wrote: “The counterargument is that the captain made a smart tactical call to defuse a hostile situation. The gesture won over protesters, as opposed to the criminal agitators. Nationwide, it helped the Guard. Since then, protesters have been pointing out agitators to the Guard.”

He continued: “The protesters (now) do not see the Guard as the enemy because of the kneeling. This tactical act had a massive strategic effect.”

Yet, despite what the columnist wrote, he later concluded: “My view? I only kneel in church and nowhere else. I think it was a terrible message and that our enemies will read it as a weakness.”

Clearly, the National Guard was put in a no-win situation.

Firstly, the soldiers are there because of the horrendous actions that have plagued the country since the protests began. The National Guard is on the street to stop violence, not to participate in the protest.

So putting the soldiers in a position where they have to choose to keep the peace and kneel, or stand their ground and potentially incite trouble, doesn’t help anyone beyond getting photos and video of the outcome.

Secondly, any videos and pictures that show either a kneeling National Guard or one rejecting the protesters divides America more. Especially if the troops are white. Imagine if the protesters shouted kneel and the soldier didn’t?

Thirdly, what if the soldier couldn’t kneel because of their religious beliefs? For example, Fremont Mayor Lily Mei told protesters who were chanting take a knee that she will only kneel to God. Would the protesters accept that from the National Guard?

Forcing soldiers and police officers into political gestures is a bad precedent for future protests and one protesters should avoid pressuring.

The actor James Woods said: “Such a dangerous precedent. For liberals with an IQ of 9, let me make it simple: imagine your local Guard takes a knee for the KKK, to use a horrid scenario. All of a sudden it’s not so great to allow our military to engage in political gestures, is it?”

It’s an extreme example but he’s not alone in thinking the kneeling is wrong, see below.