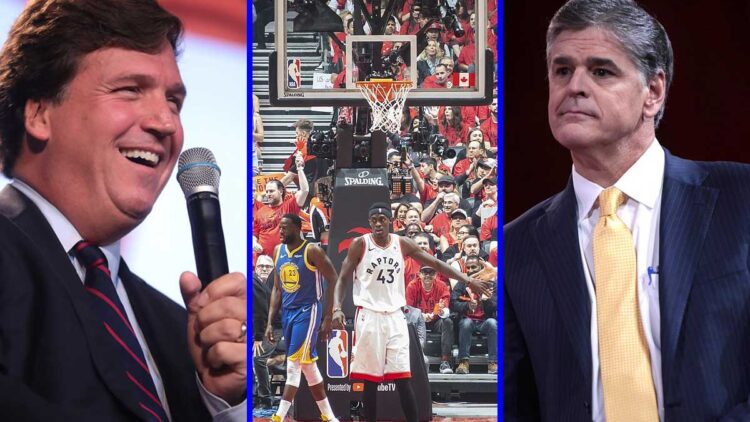 NBA ratings crushed by news shows… It sounds bizarre. Especially when fans have been waiting for live sports to return throughout the pandemic.

There’s only three possible reasons this could happen.

We’re leaning towards #3. How about you?

The fact that Tucker Carlson and Sean Hannity not only beat but crushed NBA ratings during live games isn’t something that an owner should take lightly. Yet Mark Cuban is.

More on that below, plus the NBA-China hypocrisy.

So much for fans waiting for live sports to return.

That last one is big. It means younger people would rather find out what’s happening in the country than watch the NBA.

Two of the comments that followed Clay Travis’ facts stood out for obvious reasons.

I’m a huge sports fan. A season ticket holder for the NFL & NBA at various times for 35 years. Haven’t watched a second of the NBA. Same with the NFL. Only so many times a product can spit in the face of a paying customer & expect positive results. Don’t need it & don’t miss it.

Very wise decision by viewers… That gives me hope for the future of this Nation. The pro athletes and their disrespect for Country and culture that gives them the privileges they have makes me never want to watch them again. So far I haven’t!

Read on to see his explanation and how deep this NBA-politics entanglement goes.

CHECK OUT: Watch how peaceful protesters stop a vehicle so that they can attack… What they didn’t realize was that if you make a driver scared, they’ll run things over to getaway.

Lol. You do realize that was the day @JoeBiden picked @KamalaHarris ? Nothing makes a Fox News viewer want to get lied to more.
And while we are at it, explain why advertisers pay 3x or more for a prime time @Nba spot over a Fox News Spot? And who has had advertiser boycotts ? https://t.co/Z5og6iPNuv

Let us break down what billionaire Dallas Mavericks owner Mark Cuban is saying.

What Cuban doesn’t even acknowledge is that the political agenda the NBA and its players have pushed may have had an impact on NBA ratings.

CHECK OUT: The Vice President debate is happening and getting a lot of media attention. Ironic, considering the media isn’t pushing for the Presidential debate.

Clay Travis’ response to Mark Cuban is below:

Mark, what’s up, bud? Since you’re hanging out in my mentions would you like to Tweet support for Hong Kong democracy protesters, condemn concentration camps in China, & endorse human rights for all Chinese people or do you want to continue to shut up and dribble for Chairman Xi?

It’s a throwback comment to a previous entanglement between the NBA, its coaches, Mark Cuban, and the President.

If you’re not familiar with the story, Mark Cuban was challenged by Sen. Ted Cruz to say “Free Hong Kong” during the Chinese protests.

Cuban replied that he doesn’t get involved in foreign policy because there’s too much to do in America, and cited Black Lives Matter, systemic racism, and all the other leftist taglines.

CHECK OUT: Can you understand what Joe Biden is saying as he tries to explain how he’ll handle China? We can’t.

Back in October 2019, President Trump called out NBA coaches for pandering to China. He said: “I watched the way that Kerr and Popovich and some of the others were pandering to China, and yet to our own country, it’s like they don’t respect it.”

This pandering began after Houston Rockets GM Daryl Morey tweeted in support of the Hong Kong protests. China reacted by pulling sponsorships and not airing games.

The tweet was deleted, Morey apologized, the NBA apologized, even LeBron James came out condemning the tweet.

The reason this is relevant is because Kerr, Popovich, LeBron, and others have all been critical of human-rights issues, gun legislation, and police brutality. Yet they cannot question China.

The reason: The NBA earns $4-billion annually from China.

And this is why Mark Cuban doesn’t care about NBA ratings and why the hypocrisy of the sport is sickening.

CHECK OUT: NBC News called out for blatant Chinese propaganda over Wuhan Lab report where no tough questions were asked.