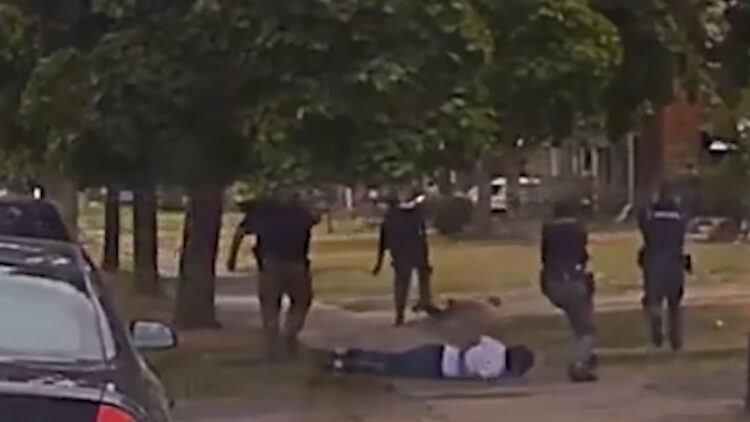 Sunday, July 12, NBC News reports that a black man had been killed by police in a shooting. The tweet read: “Detroit protesters demand justice after Hakim Littleton was killed by police,” and links off to a report.

Timeline: The shooting happened on July 10. With the protests starting because some on social media said the victim was innocent.

The protests ended on the same day after Detroit Police Chief James Craig released a video (available below) showing events.

According to Sgt. Nicole Kirkwood of the Detroit Police Department, eight people were arrested for clashing with officers during the protest. A protest which saw rocks, bricks, bottles, storage coolers, and traffic cones thrown at officers. Two officers were hurt during the protests.

So what did NBC News report two days later?

In the NBC News report, these facts are included:

FACT #1: Hakim Littleton was shot and killed by police.

WARNING: The following video shows police bodycam footage of Hakim Littleton drawing a weapon and opening fire on a police officer before being shot.

The NBC News correspondent in the report, Kathy Park said: “This bodycam footage appears to show Littleton shooting at an officer and missing before police returned fire.”

Therefore we know NBC News didn’t miss the bodycam footage or the fact Littleton fired first. This means they chose to work around the biggest part of the story to make sure it tapped into the racial narrative rather than defending the police, despite the evidence.

One Twitter user wrote: “Killed by police after he pulled a gun and shot at the police first. Bad policing is bad. This wasn’t that.”

One Twitter user summed up the whole story: “People began to protest after the local media incorrectly and irresponsibly reported the cops shot a civilian at point-blank range. After Chief Craig released the tape showing what happened, everyone calmed down.”

That’s right, local media got it wrong first. Then NBC News took the ball and ran with it two days later (July 12). Still spinning it with their narrative.