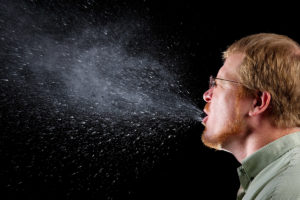 A New Jersey man is deservedly facing charges for making a terrorist threat after deliberately coughing on a Wegmans supermarket employee. Regardless of your stance on the coronavirus, it is positive that the government is taking acts of stupidity seriously — plus, it really is a terrorist threat.

CHECK OUT: DOJ review of Russia probe origins is now a criminal investigation.

During a news conference, the New Jersey Gov. Phil Murphy explained what had happened. A man from Freehold Township, George Falcone, 50, got into a confrontation with a female employee at Wegmans. During the confrontation, Falcone moved closer to within 3-feet and coughed on her and the products she was attempting to cover. He then laughed and told the employee that he had the coronavirus. Falcone also told other employees at the store that they were lucky to have jobs.

It doesn’t matter what the confrontation was about, you don’t use people’s fear of the coronavirus as a weapon.

According to the report, the employee asked Falcone to back-away because he was too close to her and an open display of food. She was attempting to keep the food and herself safe. Even if the employee was hostile during the confrontation, and there is no proof of that, coughing was a cowardly terrorist act by every definition of the word.

Terrorism is the unlawful use of violence and intimidation, especially against civilians. It describes Falcone’s act perfectly.

It wasn’t over, Falcone then refused to cooperate with a detective working a security detail at the store for 40-minutes. It was at this point he was charged with making terroristic threats, harassment, and obstruction. This all happened Sunday, March 22nd, at around 6:30 p.m. at Wegmans supermarket in Manalapan Township, New Jersey.

CHECK OUT: Top political adviser went on Fox and talked about how Hillary Clinton could run in 2020.

Mr. Falcone isn’t the first coward to use the coronavirus as a weapon. In Purcellville, Virginia, hundreds of dollars worth of food had to be thrown away by Harris Teeter employees after teens filmed themselves coughing deliberately on products. Plus a man in Warrenton, Missouri, who licked deodorant sticks in a Walmart is also facing charges.

Whether coughing on an employee to create fear or licking supermarket products on shelves to generate social media buzz, it’s the same act of terrorism. The law should come down on those being ignorant and endangering others during this coronavirus pandemic. Fortunately, it seems like the law is taking the right stance.

“Exploiting people’s fears and creating panic during a pandemic emergency is reprehensible. In times like these, we need to find ways to pull together as a community instead of committing acts that further divide us.”

“We vow to respond swiftly and strongly whenever someone commits a criminal offense that uses the coronavirus to generate panic or discord.”

If taken to the extremes of the law, Falcone and others charged in similar cases could end up in state prison for five years and with a $15,000 fine. Considering New Jersey has reported a total of 4,402 positive cases of Covid-19 (coronavirus), with 62 deaths, it’s possible those spreading the virus deliberately will see maximum punishments.

The United States has a total of 69,000 reported cases, with 1050 deaths, according to Johns Hopkins University.