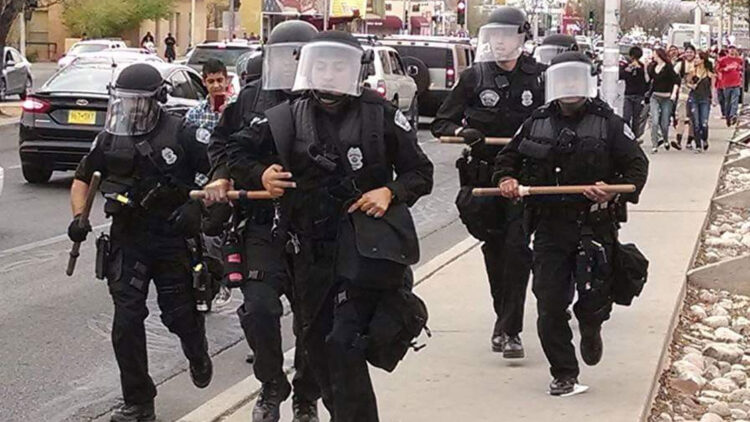 New Mexico: Outside the Albuquerque Museum, a former city council candidate was arrested for shooting a protester who attempted to topple a statue of a Spanish conquistador.

Albuquerque Mayor Tim Keller wrote: “Our hearts go out to the victim, his family, and witnesses whose lives were needlessly threatened tonight.”

New Mexico Gov. Michelle Lujan Grisham wrote in a statement: “There is absolutely no space in New Mexico for any violent would-be ‘militia’ seeking to terrorize New Mexicans, and there is no space for violence of any kind on our streets and in our communities.”

It sounds like a horrible act with the shooter opening fire because a protester was pulling down a statue. If true, there would be no possible defense. Yet, the above sorrow from Mayor and Governor doesn’t accurately portray the facts.

FACT ONE: The shooter, Steven Baca, who ran for council in 2019, has been charged with aggravated battery. He was part of a militia called the New Mexico Civil Guard, a group protecting statues from vandalism.

FACT TWO: Protesters outside the museum were attempting to tear down a statue. So, if it is their right to protest and tear down, the Mexico Civil Guard has a right to counterprotest and protect the statue.

However, based on the Governor, Mayor, and mainstream media reaction, the incident is very one-sided.

The Hill wrote: “A militiaman carrying a long gun attempted to stop one of them, leading to a scuffle in which Baca allegedly threw a young woman to the ground, after which he ran from the scene and, after being hit with a skateboard, sprayed pepper spray at another woman before firing several shots when someone tackled him.”

Why emphasize gender? The only possible reason is to make Baca sound like a coward. We thought women and men were equal, obviously not if it can leverage a narrative.

What The Hill and others don’t say is that Baca, who removed himself from the conflict, was chased down by a mob of alleged peaceful protesters, who were shouting that they were going to kill him. The mob attacked first and they attacked with intent.

We know this for a fact because there is a video proving Baca was swarmed. Yet, in modern America, these violent anarchists are protected and always end up as the victim, no matter the facts.

Warning, the following video shows a person being shot.

FACT THREE: The video clearly proves that Baca had moved away from the mob. Why else would they be chasing him?

FACT FOUR: After firing, he didn’t flee. He stayed to answer for his actions. He clearly believed he had a reason to fire and the video backs that up.

This is what happens when the government stands idle, letting anarchists rule the streets and vandalize whatever they consider offensive. People end up in situations that should never have reached that point.

The illusion that these protesters are peaceful has to end. Chasing someone down who has a different opinion isn’t peaceful, attacking them and shouting that you’re going to kill them, is a hate crime and assault.

The Mayor and Governor should be ashamed of their comments, yet as both are Democrats, defending anarchists seems to be their normal default response.

CHECK OUT: The New York Times admits that they and others in the mainstream media interpret the truth through their own narratives and ignore Conservative viewpoints.