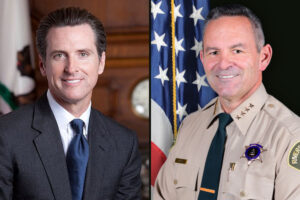 We’re seeing states reopen gradually but there’s one caveat, until there is a vaccine Governors will dictate the new normal all American’s must live by. If not, there are consequences — and some are calling this an attack on basic rights.

WHAT HAPPENED: May 5, California Governor Gavin Newsom (Democrat) told residents of his state: “We’re not going back to normal. It’s a new normal with adaptations and modifications, until we get to immunity and a vaccine.”

California is entering Stage 2 of its reopening. What this means is that from May 8, businesses including bookstores, flower shops, clothing stores, sporting goods stores, and similar, can reopen under certain modifications and conditions. Offices and dine-in restaurants will follow, later in the Stage 2 process allegedly.

If you don’t comply, expect to be punished. Normally, if you break the law, your punishment is acceptable. The issue now is that, in this new normal, basic rights have become illegal and punishable.

An Attack On Basic Rights

PATRIOT SHERIFF: On the same day Governor Newsom told California about their “new normals,” Riverside County Sheriff Chad Bianco told the Riverside County Board of Supervisors: “I refuse to make criminals out of business owners, single moms, and otherwise healthy individuals for exercising their constitutional rights.”

The Sheriff continued: “(Government) ordered residents into their homes, closed their businesses, made them wear masks, forbid them from going to church, and eliminated constitutional freedoms put in place over 200 years ago. In the name of a public health crisis, our civil liberties and constitutional protections were placed on hold.”

Bianco told the Board of Supervisors the strategy worked but highlighted the stats: “What isn’t being emphasized is that 2,000 of the 4,300 people who have tested positive have already recovered and returned to work. What that means is that out of two and a half million people in Riverside County, we have only 2,300 residents positive with this virus. Statistically, that is less than a tenth of one percent.”

The Sheriff hammered home his point: “Decisions from officials should be based on facts and data, not protections and fear.”

As he concluded, he pointed out that projections have been proven wrong, that there cannot be a new normal, and warned: “Any new normal is a direct attack on the basic rights, which set us apart and make us the greatest country in the world.”

Amen. Watch the Sheriff in action below.

CHECK OUT: A business owning patriot is sentenced to jail because they put feeding their kids before new rules.

The American Way On Hold Until Vaccination

Waiting for a vaccine isn’t viable. Those at risk need to be protected but the rest of the nation, those with immune systems that work or outside of at-risk groups have to be motivated and brave to get the economy working again.

Otherwise, there will be an even bigger threat to the American Dream, poverty.

We can all pray that scientists create a vaccine quickly. However, there are no guarantees, so Governor’s who are saying “no normal” until a vaccine could be condemning their state to a new normal that includes economic ruin.

The U.K’s Chief Medical Officer Christopher Whitty said: “We need to be careful that we don’t assume that we are going to have a vaccine for this disease as we have had for, let’s say measles, which once you have it you’re protected for life. We cannot guarantee success.”

It sounds pessimistic but honest, yet as Sheriff Bianco pointed out, decisions should be made on data not fear, and his data looked far more positive than the predictive models.

CHECK OUT: Vaccine makers have been warned by American scientists about a new mutation that could render current solutions pointless.