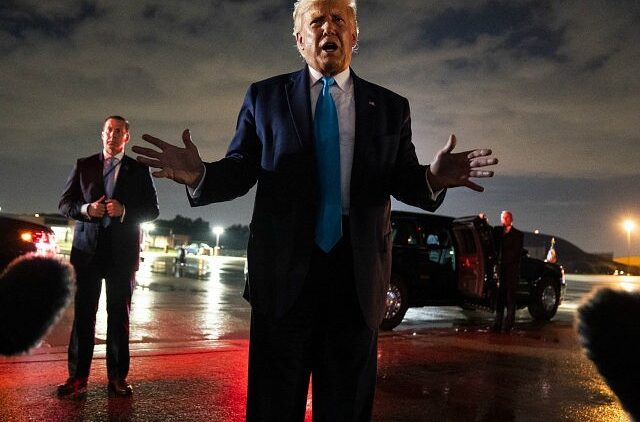 The New York Post urged President Donald Trump on Monday to stop contesting the 2020 election, warning him of a future legacy of madness.

“Mr. President, it’s time to end this dark charade,” the newspaper wrote in an editorial on Monday that was given a cover page.

“We understand, Mr. President, that you’re angry that you lost,” the paper continued. “But to continue down this road is ruinous.” The New York Post is owned by News Corp. Media mogul Rupert Murdoch serves as the executive chair of News Corp, which also owns Wall Street Journal. Murdoch also serves as the co-chair of Fox Corp. which owns Fox News.

The Post warned the president that he is careening toward a legacy of Shakespearian-level madness.

“Democrats will try to write you off as a one-term aberration and, frankly, you’re helping them do it,” the outlet wrote. “The King Lear of Mar-a-Lago, ranting about the corruption of the world.”

The paper scorched the president for paying attention to lawyers continuing to contest the election, saying it amounts to an “undemocratic coup.”

“Sidney Powell is a crazy person. Michael Flynn suggesting martial law is tantamount to treason,” the editorial read. “It is shameful.”

The New York Post reminded Trump that its editorial page endorsed him and supported him as president but that it is time to move on.

“If you want to cement your influence, even set the stage for a future return, you must channel your fury into something more productive,” it stated.

The Post expressed its immediate concerns that Republicans would lose the Senate races in Georgia if Trump continued contesting the election, shifting the majority of all three houses to Democrats.

“How high will taxes go? How many of your initiatives will be strangled?” the editorial asked. “And, on a personal note, do you think they won’t spend the next four years torturing you with baseless hearings and investigations?”

The paper issued their editorial after President Trump teased an event for his supporters on January 6th.

“See you in Washington, DC, on January 6th. Don’t miss it. Information to follow!” he wrote.