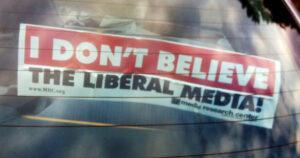 The New York Times wrote an op-ed called “Inside the Revolts Erupting in America’s Big Newsrooms,” and it is focused on the shift in mainstream media.

In the article, they admit openly that modern journalism is about emotion, being personal, and speaking their truth. That’s right, their truth. Ironically, these people, are the arbiters of fact-checking.

The New York Post wrote: “The shift in mainstream American media — driven by a journalism that is more personal, and reporters more willing to speak what they see as the truth without worrying about alienating conservatives — now feels irreversible.”

It is irreversible, and clearly unconcerned about appealing to conservatives.

The big issue is that news, a once-trusted source has become fragmented into untrustworthy, narrative-driven interpretations. For any value in news there must be facts, otherwise writing a report becomes a blog. Here lies the problem, to support either side, the facts can be manipulated, taken out of context, or ignored. This is why we have Conservative news, to tell the facts that don’t fit the Democrat narrative.

The New York Times says that this change in journalism came about because of politics, culture, and business models. Blaming a pursuit of passionate readers willing to pay for content as the reason. However, this is hard to believe as people are as passionate either side of politics. The real reason has to be favoritism, for unknown reasons, traditional media favors liberal views.

Brian Stelter, CNN’s chief media correspondent retweeted the above section of the op-ed, clearly supporting its statement that mainstream media can never go back to supporting Conservative views.

This is not a new revelation but is one rarely admitted by the media. It is a clear sign of the times, where marginalizing Republicans and Conservatives is simply accepted. Comments regarding the op-ed included calling mainstream media “Fake News.”

Others called it out as the “Death of journalism,” or stating that: “‘What they see as truth’ means they write their opinion, not THE truth. And their SJW bosses don’t care when conservatives pounce or seize.”

Unfortunately, the mainstream media can get away with saying and doing anything.