No Biden this Time: Nancy Pelosi Lands in Ukraine with Message of U.S. Solidarity 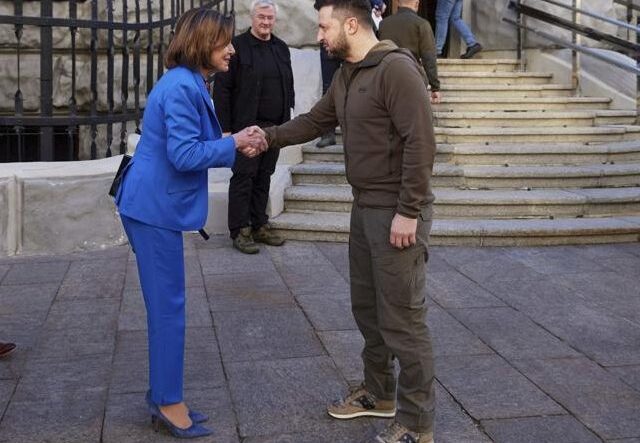 President Joe Biden dispatched House Speaker Nancy Pelosi on a secret mission to Kyiv on Saturday where she met Ukraine President Volodymyr Zelensky to deliver a message of U.S. solidarity.

Zelensky has previously pleaded with Biden to personally visit the capital city to show he stands shoulder-to-shoulder with Ukraine as it struggles through its eighth year of war and colonization by neighboring Russia.https://2eeaa3cc0b1a9bcf43854a06e96d69dc.safeframe.googlesyndication.com/safeframe/1-0-38/html/container.html

Zelensky got Pelosi instead as Biden continues to steadfastly ignore all entreaties to make a personal appearance. Rep. Adam Schiff (D-CA) was also on hand to provide diplomatic backup.

“Our delegation traveled to Kyiv to send an unmistakable and resounding message to the entire world: America stands firmly with Ukraine,” Pelosi said in a statement.

The California Democrat, who is second in line to the presidency after the vice president, is the most senior American lawmaker to visit the embattled country since Russia’s war began back in February.

Her visit to Kyiv marks a major show of continuing support for the country’s struggle against Moscow’s invasion forces.

Pelosi was joined by several lawmakers on the congressional trip that came after Secretary of State Antony Blinken and Secretary of Defense Lloyd Austin made the same journey last weekend, as Breitbart News reported.

“Our delegation proudly delivered the message that additional American support is on the way,” she said.

Footage released by President Volodymyr Zelenskyy’s office showed Pelosi and other U.S. legislators in Kyiv. In video later released by Pelosi’s office, the speaker and Zelensky both thanked each other for their support in the war.

Pelosi added: “We are here until victory is won.”