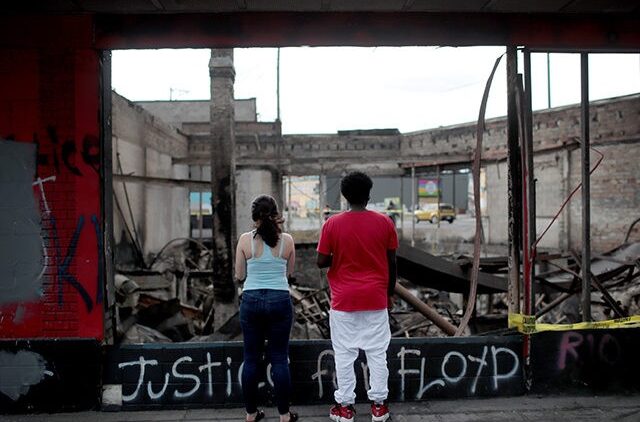 f you live in a city run by Democrats, you need to prepare yourself for the possible aftermath of the Derek Chauvin verdict.

If Chauvin, the Minneapolis police officer on trial for the death of George Floyd (P.S. Minneapolis has been run exclusively by Democrats for decades), is found not guilty, America’s left-wing terrorists in Antifa and Black Lives Matter will almost certainly make last year’s riots look like a dress rehearsal.

Does anyone doubt the terrorists in Black Lives Matter and Antifa are planning and plotting for a second wave of violence should Chauvin be acquitted?

Furthermore, does anyone doubt the Biden Justice Department will be okay with this violence — will stand by and do nothing? Keep in mind His Fraudulency Joe Biden believes America has this violence coming — even though it only happens in cities that overwhelmingly support him.

What’s more, does anyone believe in the event of an acquittal, the corrupt, corporate media — CNN, MSNBC, New York Times, Washington Post — will not openly encourage and champion this violence, just like they did in Ferguson, Baltimore, and all the cities listed above?

Listen, if you own a business in a Democrat-run city, especially some sort of storefront, you need to prepare. Fire insurance, riot insurance, window coverings… I don’t know. I’m not here to give specific advice, but you do need to prepare.

If you reside in a Democrat-run city, especially downtown or close to downtown, you also need to prepare. Don’t forget these left-wing terrorists have already begun to move into residential areas.

Again, I’m not here to give anyone any specific advice, but in my own case, were I still stupid enough to live in a Democrat-run shithole, I would…

1) Temporarily move my family to rural MAGA Land. The only place in America that’s truly safe and clean and free of racial tensions, is where Trump voters live. If I had relatives in Rural America, I would contact them right now and ask for permission for the wife and kids to stay for the duration. I would also consider renting an apartment or house in MAGA Land on a month-to-month basis. Once the violence begins, rather than try and quell it, the Democrats (just like they did last summer) will either do nothing or encourage it. So I would be prepared for a long, long, ugly and violent haul.

2) I would not move away. While my family was somewhere safe, I would stay home to protect my home and/or business. This would mean boarding up windows, stocking up on supplies, and being prepared to legally defend myself and my property.

3) I would use this time alone to do some soul-searching about why I’m so foolish and suicidal I choose to live in a Democrat-run city. Do I enjoy racial tensions, pollution, hate crimes, gun violence, mass-shootings, and riots? What the hell am I doing living in a shithole, forcing my family to live in a shithole?

If numbers one through three weren’t possible, I would at least make sure I had an escape plan, like what’s known as a bug-out bag — you know, everything you need for a few days on the run all packed up and ready to move on a moment’s notice: clothes, food, water, matches, prescriptions… that kind of thing.

As far as my advice for us Trumptards who live in rural MAGA Country if Chauvin is found not guilty? Well, none… Even though we’re the ones accused of being violent, racist, and anti-environment, out where we live, there are no riots, no hate crimes crises, or racial strife; our air, water, and streets are safe and clean. We all own guns, but we have no gun violence or mass shooting crises.

One thing we could do is grill up some burgers and then sit in front of our 70-inch plasmas to watch all the hell unfold in these Democrat-run shitholes, but I’m getting tired of reruns.

P.S. There could be some problems in places where Democrats are not in charge, even out here in MAGA Land, but those problems won’t last long. Our law enforcement are allowed to enforce the law, and unlike cities where Democrats run things, they do so without kneeling on some poor guy’s neck for eight minutes.