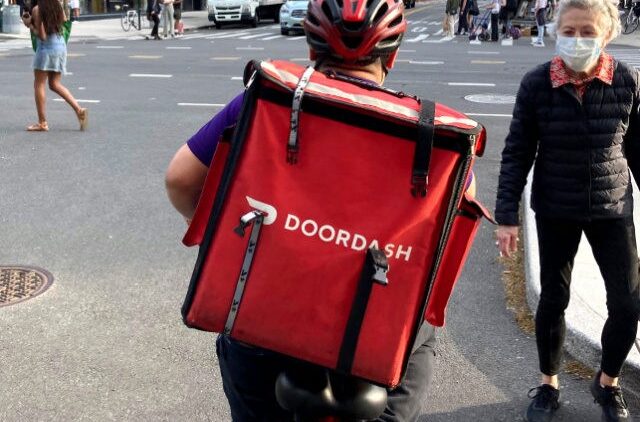 “Video posted to social media shows a delivery driver tampering with food that had been ordered by an NYPD officer — and now the driver could face charges,” far-left NBC News reports.

How is this not an act of domestic political terrorism? And what kind of social media ecosystem does this guy inhabit where he feels comfortable bragging about doing something so awful?

The corrupt media spend all their time looking to get Qanon booted offline, people who are guilty of nothing more than believing stuff, but these anti-cop ecosystems never even rate a mention:

In the gross video, the DoorDash delivery man could be seen sticking a note inside a Chipotle container with his bare hands, contaminating the meal. The note read “Hope that —- taste good,” giving the impression that the food might have been tampered with in other ways as well.

Police said the incident occurred sometime between 2 p.m. and 3 p.m. on Monday. The food was brought to the officer at the 61st precinct in Brooklyn and he threw it in the trash.

The incriminating video was posted on Facebook by a user named So Certified. In the comment section, he claimed to have been the one who put the note in the food, saying “This is a Facebook public announcement, I don’t violate people food like that … that was personal. we at war.”

That I agree with.

So it is political, and if such a thing were done to a child molester rotting in prison, there would be (and should be) serious consequences.

DoorDash expressed its horror in a statement to NBC. “This behavior is absolutely unacceptable and has no place in our community. We take the trust and respect of merchants, customers, and Dashers extremely seriously.”

They say the DoorDasher’s accounts have been “deactivated,” which, I guess, is 21st centuryspeak for “we fired his ass.”

There is some good news. “Police are now searching for the delivery driver,” reports the same NBC News that has done so much to gin up this unwarranted hatred of police officers. “If they are able to track him down, he could be arrested and charged with reckless endangerment, which is a felony.”

Yeah, and then some left-wing district attorney surfing on campaign donations from George Soros will let him go.

We don’t know if the police officer ate the food: poor guy or gal.

The climate manufactured around police officers by Democrats and the political media is really something. They’re not only responsible for this terrorism, all of it — from A to Black Lives Matter — they’re also responsible for encouraging and championing it.

If a Red-hatted MAGA guy did this exact same thing to someone inside CNNLOL, it would be the top story until Jake Tapper ran out of smug.

This story will be gone before Don Lemon and Chris Cuomo can high-five over it.