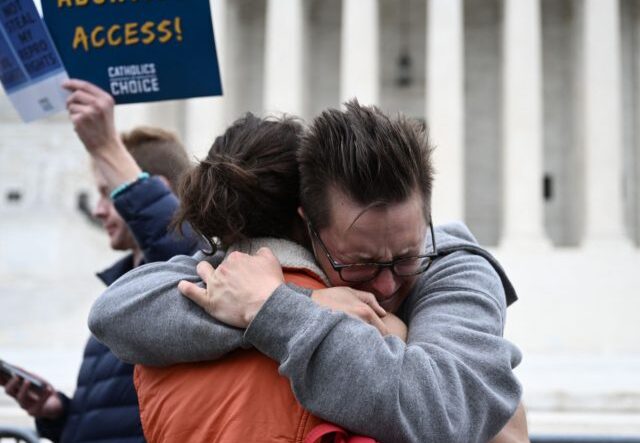 If the Supreme Court does end up overturning Roe v. Wade (which it should), this does not mean abortion will be outlawed.

Overturning Roe v. Wade merely does the right thing in putting an end to the insane idea that a woman has a constitutional right to slaughter her unborn child.

Unlike the clearly stated Constitutional right to own a firearm, nowhere in the Constitution does the right to abortion exist. It is a fabricated right invented more than 50 years by a left-leaning Court.

So, if that’s the case and Roe v. Wade is overturned (as it should be), what happens? What will it mean?

Well, if you look at it from 30,000 feet, it means very good things for democracy. Instead of a handful of unelected judges deciding what should and should not be legal, it will be up to We the People to decide through our elected representatives. According to the Constitution, that’s how it is supposed to work.

And so, the issue of abortion will land where it has always belonged: in the lap of state or local governments. In other words, elected representatives accountable to voters will decide if slaughtering an innocent, unborn child should be legal or not.

The news is not all good…

Unfortunately, if Roe v. Wade is overturned, abortion will still be legal all over the place. In places like California, abortion will be legal even after the child is partially born. That is good news for those who enjoy infanticide. Which brings me to my next point, not that the crazy baby-killers will ever hear it…

On this issue, it is the conservatives who are being reasonable and democratic and the leftists who are being fascist extremists. (When is that not the case?)https://d86892e9b6677462b4e967a66dfcd544.safeframe.googlesyndication.com/safeframe/1-0-38/html/container.html

Conservatives are not calling for the Supreme Court to outlaw abortion. What we want is the issue to be decided where it belongs: in the political rather than legal arena. We want state and local governments to decide. We want The People to decide through those they elect. That’s called democracy. What the left wants is to remove democracy from the issue entirely. The left wants this monstrous procedure legalized by fiat, by five people no one elected.

And if I may be so bold as to speak a little common sense to both men and women… You will still have the right to choose. Yes, you really will.

You will still have the right to choose to use adequate birth control.

You will still have the right to choose to control yourself.

You will still have the right to choose to give an unwanted child up for adoption.

You will still have the right to choose to behave like a responsible, compassionate adult instead of an animal who would snuff out an unborn life for purposes of convenience.

And, unfortunately, you will still have the right to choose to kill an innocent baby even after it’s partially born in plenty of Democrat-run states and cities.

Oh, and FYI: Abortion is an atrocity.