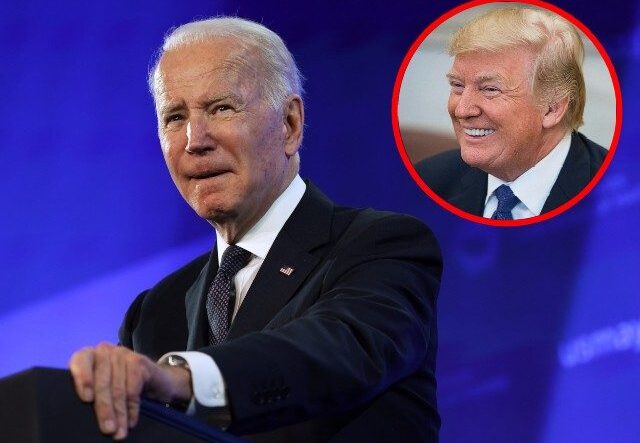 For the first time in this Yahoo/YouGov poll, Donald Trump beats Joe Biden in a potential 2024 rematch.

What’s significant about this poll is that it comes from the establishment media. Oh, and it comes at the same time Nancy Pelosi and Liz Cheney’s January 6 kangaroo court is enjoying billions and billions of dollars in free publicity, including broadcasting during primetime on most of the major networks.https://6d82ecd8a2e07e2e91a519b17c42a5bb.safeframe.googlesyndication.com/safeframe/1-0-38/html/container.html

Here are the most interesting numbers…

If the election were held today, Trump would beat Biden 44/42 percent in a rematch. This is the first time in this poll Trump has jumped into the lead, so good job, Nancy and Liz!

Biden’s approval/disapproval rating sits at a dismal 39/56 percent, which means he’s underwater 17 points. That is his highest disapproval rating in this poll. Three weeks ago, Biden enjoyed a much healthier rating of 42/53 percent. Put another way, in just one month, he’s lost six points.

Yahoo/YouGov adds that “on average, Biden’s job approval scores are now a few points worse than Trump’s were at the parallel stage of his presidency.”

Despite all those billions in corporate media collusion with Nancy and Liz’s January 6 kangaroo court, Yahoo/YouGov found that Trump’s personal favorability rating edges out Hunter’s Dad by three points: 43/40 percent.

A whopping 61 percent of voters disapprove of the way Biden is (mis)handling the economy.

Only 21 percent of voters want Biden to run for a second term, including 40 percent of those who voted for him in 2020.

All of this tracks perfectly with what we are seeing in other polls, including the RealClearPolitics poll of polls, which has Biden at 39.9 approve and 54.4 disprove.

Even FiveThirtyEight has Biden’s averages at almost the same numbers: 39.9 approval, 54.5 disapproval.

Trump’s favorability sits at a healthier -7.5, or 44 favorable and 51.5 unfavorable.

The whole thing is backfiring on Democrats and their corporate media allies. Compared to last year, per an NBC poll (NBC!), fewer people blame Trump for the riots that broke out at what was a mostly peaceful protest at the U.S. Capitol.

The whole thing is dumb and partisan, and the American people know it.

What’s more, as gas and food prices hit one demoralizing record high after another, voters are disgusted by the lack of focus in D.C. on problems that matter. While working people drown in this morass, Joe Biden is policing pronouns, and Pelosi’s Congress is putting on show trials.

Everyone knows we’re headed into a recession, possibly a long one, and most definitely one that could have been avoided had Biden not spent trillions unnecessarily and then shut down large parts of our domestic oil and gas production.

The news from the media and Democrats, though, is Our Trump obsession is more important than your family’s financial woes.