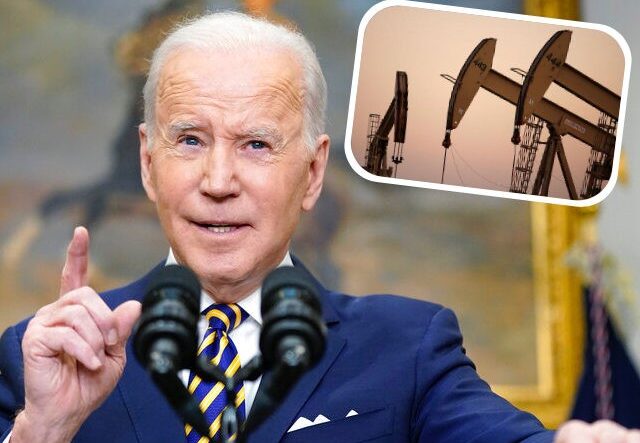 The whole idea of the Strategic Petroleum Reserve (SPR), which is owned by the U.S. government, specifically the U.S. Department of Energy, is to hold on to about 700 million barrels of oil in the event of an emergency or disruption.

But now, because His Fraudulency Joe Biden has closed pipelines, killed oil and gas leases, refused to allow refining to expand, and has gone to war with affordable energy; the SPR is releasing about a million gallons a day into the U.S. economy.

Instead of doing something permanent and useful; instead of solving the crisis he created (that put a gallon of gas over five dollars), he’s looking to steady gas prices his collapsing poll numbers by squandering our reserves.

That’s bad enough, so bad the SPR is now at its lowest level since 1986.SUBSCRIBE

Well, when it comes to punishing the American people he so obviously loathes, that’s bad enough is never enough for Biden. Nope. He always finds a way to take his contempt for America and Americans a step further—which he has. Get this:

More than 5 million barrels of oil that were part of a historic U.S. emergency reserves release to lower domestic fuel prices were exported to Europe and Asia last month, according to data and sources, even as U.S. gasoline and diesel prices hit record highs.

The fourth-largest U.S. oil refiner, Phillips 66, shipped about 470,000 barrels of sour crude from the Big Hill SPR storage site in Texas to Trieste, Italy, according to U.S. Customs data. Trieste is home to a pipeline that sends oil to refineries in central Europe.

Oh, and, “Cargoes of SPR crude were also headed to the Netherlands and to a Reliance refinery in India, an industry source said. A third cargo headed to China, another source said.”

We’re sending our oil to the country that sent us the coronavirus!

Why would Biden okay this when 1) this oil is about protecting America’s national security, and 2) this oil can help bring down American gas prices?

The asking of the question gives you the answer. The answer is right there in the words “America” and “Americans.”

Joe Biden and the Democrats hate America and Americans. They see us as the problem. You see, we drive cars and live in big houses. So do they, but they see themselves as the elite, as overseers, and our overseers don’t want the rest of us to be comfortable or independent. They want us needy and dependent because that’s where they derive their fascist power from.

Joe Biden and the Democrats will always put foreign countries and foreigners above Americans, especially the millions of illegal aliens they hope to replace us with.

They hate us. They hate everything about us. We’re too self-sufficient, we just want to be left alone, we’re about to vote a buttload of them out of office, and when it comes to their sick, perverted, we-want-to-have-sex-with-your-children trans agenda, we are not buying it.

So, Joe Biden and Democrats are punishing us for the sin of wanting to be left alone and wanting our children to be left alone. They are deliberately increasing gas prices to hurt us, and one way to increase gas prices is to ship our oil to foreign countries. Another way is to flood the country with millions of illegals who consume oil (and housing), creating more scarcity and higher prices.