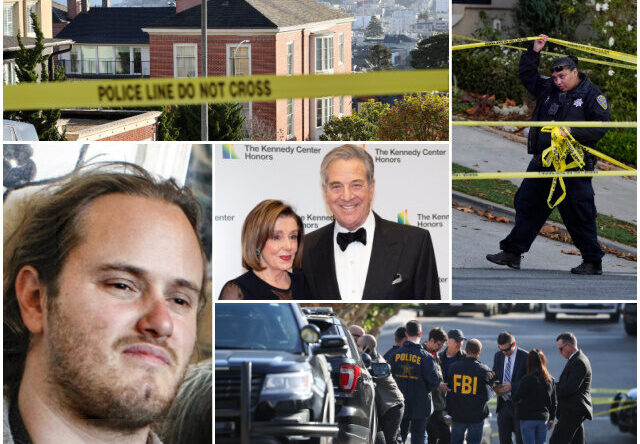 The latest news on the Paul Pelosi incident is that when the cops showed up at his house last week, he told them, “everything’s good,” and then walked back into his house as though he had nothing to fear from his alleged assailant, David DePape.

Just like everything else that appears to go against the media’s ludicrous lie about Mr. Pelosi being the victim of a crazed Trump supporter (who lives in a hippie commune plastered with gay flags and Black Lives Matter banners), rest assure this report will soon be retracted, but for now, check it out:

Paul Pelosi never let on to responding officers that he was in distress just seconds before he walked back into his house where a man bludgeoned him with a hammer, new details have revealed.

The 82-year-old husband of the US House Speaker Nancy Pelosi instead smiled at the officers who had responded to the high priority 911 call at his San Francisco home last week, according to court documents, and told them ‘everything’s good.’

Instead of telling officers he needed help, or trying to flee the home, Pelosi retreated back into the foyer where police saw the attacker strike him with a hammer, sources close to the investigation told NBC News.

Here’s the original report from the election deniers at NBC News.

NBC adds, “Why Pelosi didn’t try to flee or tell responding officers he was in distress is unclear.”

Then there’s this from NBC: “We still don’t know what happened between Mr. Pelosi and the suspect for the 30 minutes they are alone and in that house.”

Fake media outlets like the election deniers at Politico initially reported a third person was in the house and that this third person opened the door for police. Then Politico retracted that report and criticized those who believed their initial report for “spreading disinformation.”

Fake media outlets told us Mr. Pelosi’s alleged assailant was in his underwear. Then these outlets retracted the claim and attacked anyone who believed their initial report as a conspiracy theorist.

Also lying there in the ether is a police dispatch recording that says Pelosi told the cops that his alleged attacker’s “name is David and that he is a friend.”

The friend thing can’t be retracted because we have a recording.

On top of all this hoo-hah, authorities are refusing to release any security or police body cam footage.

Well, if Mr. Pelosi told the cops “everything’s good” when he could have run out the door to safety… If Mr. Pelosi strolled back into the house after the police arrived instead of running to safety, I can see why the government would not want the public to see the footage. Same with the footage of Mr. Pelosi’s DUI arrest just a few months ago.

Democrats sure got it good.