DNC Communications Director: “We Are Not Officially Nominating Joe Biden” 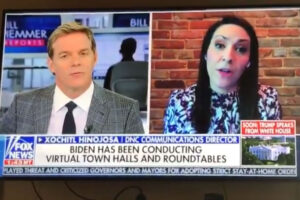 Joe Biden, the man everyone thinks is running against President Trump in the election isn’t even the official DNC nominee.

In an interview with Fox news, Xochitl Hinojosa, the DNC Communications Director said: “We are not officially nominating Joe Biden.”

It’s a big statement, considering it was buried within a throw-away response regarding the party convention, which was meant to be held in July, but is now scheduled for August.

Fox News anchor Bill Hemmer asked Xochitl Hinojosa: “There’s a real possibility the convention does not happen or it happens in a virtual sense. Is that correct as of today?”

If it’s not going to be Joe Biden, someone needs to tell him because he’s already hit out at the President with an attack ad.

CHECK OUT: Joe Biden says pandemic has cost millions of lives and thousands of deaths in latest (but not worst) gaffe.

We All Presumed Joe Biden

Everyone just concluded it would be Joe Biden after Sen. Bernie Sanders dropped out of the race and vowed to support the Democrat nominee.

All the headlines at that point said Sanders was endorsing Biden but it seems the DNC are trying to keep some mystery surrounding it.

Ironically, Biden even thinks it’s him, saying at the same event in April: “If I am the nominee, which it looks like now you just made me, I am going to need you, not just to win the campaign, but to govern.”

The big question is, if this was a mistake by the DNC communications director, why hasn’t it been addressed?

Only Joe Biden Is Left

MICHAEL BLOOMBERG: The 78-year-old billionaire who entered the race in November. After a disastrous showing on Super Tuesday dropped out and endorsed Biden.

TULSI GABBARD: Dropped out in March and endorsed Biden.

CORY BOOKER: Qualified for five debates but failed to meet the requirements for the sixth event, dropping out of the race in January.

MIKE GRAVEL: Dropped out without making the debate stages and endorsed Sanders.

AMY KLOBUCHAR: She ended her campaign before Super Tuesday and is planning to endorse Biden.

BILL DE BLASIO: De Blasio didn’t qualify for the third debate and dropped out in September.

The list goes on-and-on and they all have one thing in common, they dropped out leaving Joe Biden the victor. So expect no surprises by the DNC, unless they try to prop-up Hillary Clinton or Michelle Obama at the last minute.