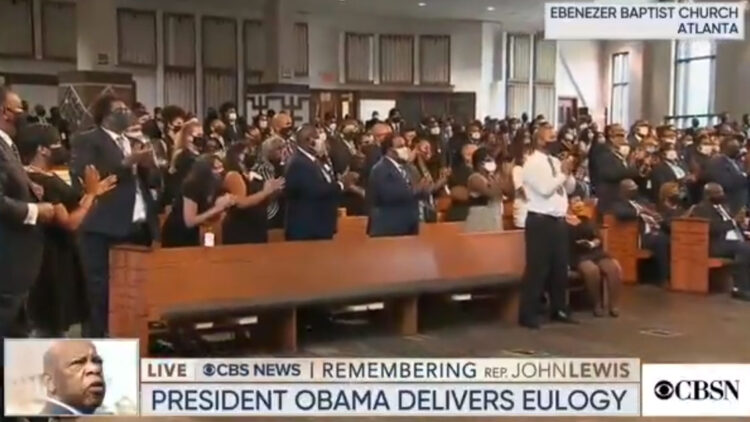 July 30: At the funeral of Democrat John Lewis, former-President Obama’s twisted political eulogy shocked even us.

It would have been a touching sign of respect and decency. However, the eulogy wasn’t exactly one of sorrow.

At a time when we thought Democrats couldn’t sink lower than labeling domestic terrorists as “peaceful protesters,” former-President Obama delivered a cringe-worthy political eulogy that was undeniably part of a 2020 election campaign message.

Listen to the clip below and make up your own mind.

CHECK OUT: Did you know 62-percent of Americans are scared to share their political beliefs?

Three things stood out about the clip.

No moment is too sacred for Obama not to politicize.

I’ve never seen clapping at a funeral, ever. Also, we’re allowed to do funerals now?

We checked, and Democrat funerals being used for political gain is not one of the situations exempt from coronavirus lockdown rules.

Simply put, if citizens are not allowed to attend funerals, weddings, or indoor gatherings, without social distancing and limitations, how is the above acceptable?

Not only does the video show that former-President Obama will do anything for votes, including a twisted political eulogy, but it also shows the Democrats lockdown hypocrisy.

And we’re not alone in seeing it.

I thought this was an 8 day funeral.. Not a DNC convention. I guess since police won't protect the DNC convention now they decided to change the funeral into another propaganda rally.
SHAMEFUL !!!!

CHECK OUT: Democrat logic = Law-abiding citizens get new lockdown laws but rioters can do as they please.