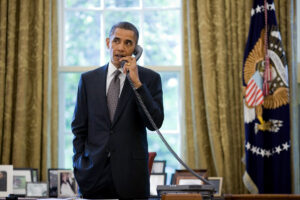 President Trump called former President Barack Obama “grossly incompetent.” It was a media provoked response, looking for a reaction after Obama had questioned the current administration over the COVID-19 pandemic.

Obama, who has been in the spotlight for Obamagate in recent weeks has become more outspoken, saying that the pandemic has revealed that those in charge don’t know what they’re doing.

On Sunday, May 17, the President returned from Camp David, after a working weekend. When asked by reporters he replied: “We did a lot of terrific meetings, tremendous progress is being made on many fronts, including coming up with a cure for this horrible plague that has beset our country.”

When pressed about Obama’s comments, the President said: “Look, he was an incompetent president. That’s all I can say. Grossly incompetent.”

CHECK OUT: Watch another one of Joe Biden’s gaffe’s as he says pandemic has cost millions of lives and thousands of jobs.

On Saturday, May 16, former-President Obama told graduates that current leaders are clueless.

Obama said: “More than anything this pandemic has fully finally torn back the curtain on the idea that so many of the folks in charge know what they’re doing, a lot of them aren’t even pretending to be in charge.”

It’s not the first time Obama has made comments towards the administration.

During a call with 3,000 former Obama staffers, he said that the current government had taken a “What’s in it for me?” approach. Adding that the White House’s response was “an absolute chaotic disaster.”

What more could have been done?

If Obama means the country could have gone into lockdown earlier, then the blame must fall on the medical experts that Democrats still want this nation to listen to. Dr. Fauci admitted that the one and only time he asked the President to lockdown, he did.

REPORTER: “So, Mr. President, President — former President Obama seemed to suggest that you aren’t even pretending to be in charge.  What’s your response?”

THE PRESIDENT:  “So, I think we had a great weekend.  We did a lot of terrific meetings.  Tremendous progress is being made on many fronts, including coming up with a cure for this horrible plague that has beset our country.  I think a lot of things have happened, very good, very — it was a working weekend.  It was a good weekend.  A lot of very good things have happened.”

REPORTER: “He (inaudible) twice at the leadership.”

THE PRESIDENT:  “Look, he was an incompetent President.  That’s all I can say.  Grossly incompetent.”

The President didn’t even know what Obama said, so his reaction is based on other events. Possibly Obamagate.

CHECK OUT: NYPD tackle mother like she’s armed and dangerous, after an altercation over wearing a mask wrong. Plus evidence some NYPD officers don’t practice what they enforce.