Ocasio-Cortez: ‘Enough Misconduct’ for Trump to Be Impeached 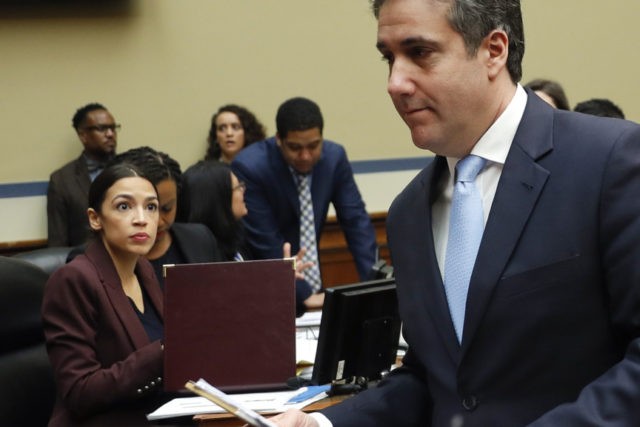 After grilling Michael Cohen, President Donald Trump’s disgraced former personal lawyer, last week, Rep. Alexandria Ocasio-Cortez (D-NY) said on Monday that she thinks there has been “enough misconduct happening out of” the White House for Trump to be impeached.

“I understand the leadership, perhaps, would like to build a stronger case and subpoena more records or figure out what’s happening, perhaps in the Mueller investigation,” she said at a press conference in Queens, New York, after opening her first congressional district office. “And so I defer to the chair, I defer to the party leadership… I certainly believe that there’s been enough misconduct happening out of this office that it would be unbecoming of any president.”

Top Democrats, including House Speaker Nancy Pelosi (D-CA), have reportedly been worrying that beginning impeachment proceedings against Trump could backfire on Democrats in 2020.

Some Democrats who favor a more cautious approach to impeachment also reportedly believe that the party will have a better chance of defeating Trump if they subpoena his financial documents and make the case to voters that Trump has been “swindling” them.

But Ocasio-Cortez, who said impeaching Trump was a “no-brainer” before she was even sworn into office, said that though she is deferring to her party’s leadership on the impeachment question, she has been “very clear” that she will vote for impeachment if she gets an opportunity to do so.

“It’s been very clear that I’ve been supportive of… how I would vote in terms of impeachment,” Ocasio-Cortez said.

She also said that Democrats should focus more on Trump’s tax returns and financial statements in the coming months.