Ocasio-Cortez: I Want to Have ‘One Less Child’ Due to Climate Change Crisis 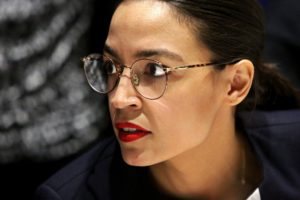 Ocasio-Cortez’s appearance following her vacation prompted one viewer to ask, “How can we save the climate. I’m trying to have a nice life.” Ocasio-Cortez told viewers the same question keeps her up at night. It, quite literally, woke her up during her vacation, she claimed.

“Even while I was on vacation I woke up in the middle of the night at 3:30 in the morning just concerned about climate change,” Ocasio-Cortez told viewers:

Last night on Instagram live while @AOC was making some boxed mac and cheese, she told a sob story about how she “woke up in the middle of the night while on vacation at 3:30 in the morning” because she was so worried about climate change…

She also told viewers how the climate change “crisis” is affecting her long-term family planning. She said she has always wanted to adopt children but added that she wants to have one less child due to environmental concerns.

“Even now, you know when you put climate change on top of that, I know that I want to perhaps have one less child than I thought I would maybe have,” the freshman Democrat said, adding “older generations” do not understand how much climate change impacts the decisions of the younger generation.

“I think having a mixed family is part of my personal planning. But it’s really hard, and I don’t think sometimes that older generations understand how much we’re taking this into account,” she continued:

“I think young people are more informed and dynamic than their predecessors. I think that they are more sensitive in a positive way in that they actually care about other people’s experiences and lives,” she said, praising what she calls the younger generation’s “radical acceptance.”

“If anything, I think they’re profoundly courageous because they’re willing to puncture taboos and have conversations that frankly older generations sometimes struggle to have,” she said.

“I think this new generation is very profound and very strong and very brave because they’re actually willing to go to the streets. How about that?” she said.