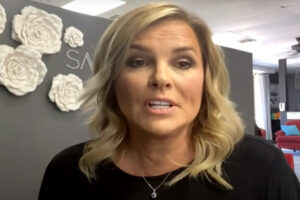 A patriotic business owner has been sentenced for putting family first against a judge who effectively threatened apologize or suffer the consequences.

THE FACTS: In a contempt hearing, a judge offered a Dallas hair salon owner who reopened early the choice, apologize, admit wrong-doing, and close the store or face jail time and fines. The business owner refused to do so.

Instead the business owner explained their actions, defying the judge and stating: “Feeding my kids is not selfish.”

Should we be celebrating the business owner’s actions? Let us know in the comments.

Officials asked her to close the business and issued a citation for being in defiance of the state’s stay-at-home order. The citation said if Shelly Luther ignored the citation, she could be fined up to $2,000.

Luther told reporters that she was unable to perform any of her three jobs, which included musician, makeup artist, or hairstylist during the lockdown. She added: “I don’t want to cause any problems, but when you’re out of money someone has to stand up and say that they’re not helping us by not letting us work.”

When warned that she could lose her business license, she said: “It won’t matter if I have a license because I won’t have a business.”

Since making a stand, Luther has been on Inside Edition (watch below) and had a GoFundMe page started, which currently stands at over $150,000 raised in support of her actions.

CHECK OUT: The mainstream media get shredded by Republican Governor armed with facts.

Judge Of The Year

THE HEARING: During the May 5 hearing, Luther told Judge Eric Moyé the following: “I have hairstylists that are going hungry because they’d rather feed their kids. So, sir, if you think the law is more important than kids getting fed then please go ahead with your decision but I am not going to shut the salon.”

Judge Eric Moyé, a lifelong Democrat presiding over the 14th Civil District Court located in Dallas County, sentenced the business owner to seven-days in prison, a $3,500 fine, and a further fine of $500 for every day the business remains open.

So not only did Judge Moyé, trial judge of the year in 2014, punish the business owner with jail time, they decided to take money away from the business, employees, and ultimately, keep kids from getting fed.

It’s a move that answers the earlier question about whether the judge thinks law is more important than children eating.

The irony to all of this is that, almost simultaneously to the hearing, Texas Governor Greg Abbott announced hair salons could re-open May 8.

Watch patriot Shelley Luther stand-up to the judge below: