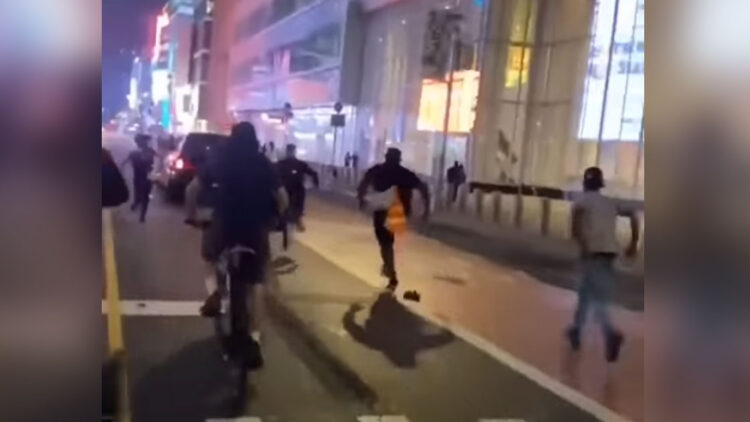 Those innocent peaceful protesters are at it again, acting out their domestic terrorist fantasies with immunity.

July 8, 9:10 pm: Peaceful protesters block off a midtown road in New York City with rental bikes. They innocently surround a Dodge Durango, and one of the protesters calmly tells the driver: “We weren’t going to be long.”

However, the driver was being aggressive and wouldn’t stop and plows through the protesters…

That’s the narrative given by one protester according to reports and is the spin from most of the media.

In their narrative, peaceful protesters are the victims. They’re just trying to make an alleged oppressive and racist America see sense.

The facts prove a different story.

Peaceful Protesters Without The Spin

Now for the facts:

The driver was later stopped by police and taken to Manhattan’s South Precinct. According to reports, the driver told the police “he fled because he felt threatened by the group.” The driver was not arrested.

Which part of the “peaceful protesters” narrative allows for the wielding of a knife or other tools that could burst a tire? Plus, what was the objective? To cause damage or like in other cases around America, to cause serious harm?

Video #1: Ironically, the video is from a protester who titled it ‘SUV plowed through protesters on 42nd street in Manhattan. NYC.’

One YouTube commenter gave it a more appropriate title: ‘Thugs attack an SUV and it drives off.’

In the video, you can hear the peaceful protesters audibly threaten the driver that his tires would be popped.

Video #2: This next video shows at least one tire being burst by peaceful protesters.

These aren’t isolated incidents, and the evidence against the peaceful protesters narrative is miles high. Yet it keeps being pushed.

However, regardless of how criminal actions keep being spun, the disturbing truth is that Governors and Mayors still haven’t realized that the longer they let the anarchy play out, the more chance of fatal violence — and that blood will be on their hands as much as the anarchists.