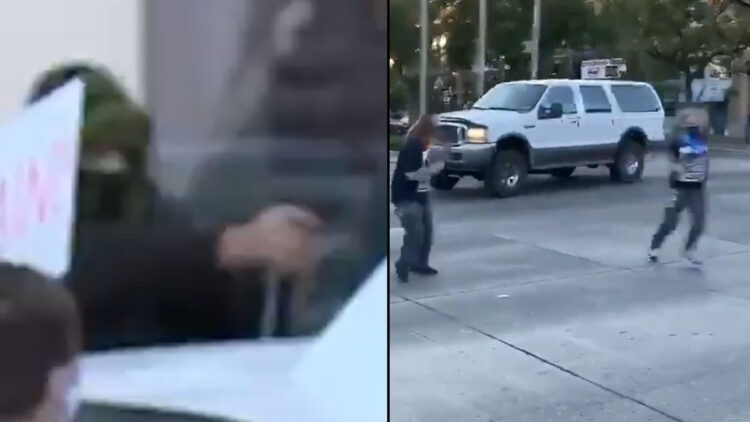 At what point will the mainstream media stop pushing the “peaceful protesters” narrative? It’s not true, and whatever the agenda behind the lies, it’s pushing the United States further into anarchy and that’s good for no one.

For instance: In Utah, a “peaceful protester”, with their identity hidden in an outfit AOC would be proud of, sneaked up to a driver who had stopped because of a human roadblock and opened fire.

WARNING: The videos below show the event in slow motion.

The Provo Police department in Utah released a statement saying: “The driver, who was struck by the bullet, hit the gas trying to leave the situation. The same protestor ran after the vehicle and shot a second-round that went through the rear passenger window. The video then shows that the protestor conceals the firearm and continues to protest. This same protestor later approached another vehicle at 500 North and University Avenue striking and breaking the window with the handgun.”

This wasn’t an isolated shooter, but a duo. The second shooter has a different colored top and a bag, which you can see in the videos above.

The police later announced that Mr. Jesse Taggart, 33, had been arrested for the shooting. Charges include: attempted aggravated murder, aggravated assault causing serious bodily injury, rioting, threatening use of a weapon in a fight or quarrel, criminal mischief, and firing a weapon near a highway.

Additionally, the second shooter has allegedly been identified.

If covered by the mainstream media, they’ll likely be called “white supremacists,” despite clearly supporting the Black Lives Matter movement on their social media profiles. That’s if this story is covered at all.

CHECK OUT: The Capitol Hill Autonomous Zone has two opposing militia, one of which is linked to an attempted ICE car bombing. Yet, they’re not terrorist

It’s clear that being armed at roadblocks is the new trend for “peaceful protesters.” However, according to NPR, who wrote that: “Right-wing extremists are turning cars into weapons,” the drivers are at fault.

What NPR failed to highlight in the headline or opening paragraphs is that the example they use within their article only happened after “peaceful protesters” attacked the driver, and brandished a firearm.

Below you can see the events:

On Monday 29 May, police officers charged through a similar human roadblock after being attacked, The Washington Post wrote: “Detroit Police Chief James Craig defended the officers’ actions, saying that the cops “did the right thing.” Craig said that a rear window had been busted out and officers received reports of several protesters who were armed with hammers.”

So far, it’s fair coverage by The Washington Post.

Then they flip the events, saying: “The details around those reports remain unclear.”

Is the damage to the vehicles not enough proof?

They conclude the story by saying: “The incident came at the end of another day of peaceful protests in Detroit.”

By saying the reports remain unclear, The Washington Post is questioning what the police said. Perhaps they didn’t see the dashcam footage from the officer’s cars which clearly show the insanity of the protesters and the audible attacks (below).