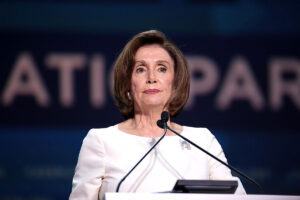 Nancy Pelosi played doctor on CNN as she spoke with Anderson Cooper about President Trump’s admitted use of hydroxychloroquine.

In the interview, House Speaker Pelosi said: “I would rather he not be taking something that has not been approved by the scientists, especially in his age group, and his, shall we say, weight group, that is morbidly obese.”

It’s a double whammy, not only does Pelosi fat-shame the President but like most of the mainstream media, they ignored the fact President Trump sought medical advice before taking hydroxychloroquine.

Considering, there have been legal actions over fat-shaming, the way the left have not jumped all over this just shows how anyone can say anything about the President and get away with it.

However, the one positive to this is that the President’s comeback tweet will be epic.

CHECK OUT: Governor can’t pay first responders but is able to give out millions to illegal aliens.

During a meeting with restaurant owners at the White House the President said that he had been taking hydroxychloroquine for a couple of weeks.

He said: “A couple of weeks ago I started taking [hydroxychloroquine]. I hope to not be able to take it soon because you know I hope they come up with some answer, but I think people should be allowed to.”

The President, throughout the COVID-19 pandemic, has pushed a hydroxychloroquine combination of drugs as a potential treatment. With one Democrat even thanking the President for saving her life, because of his suggestions.

The President is tested every few days for the virus and during the meeting, he told everyone the results are: “Totally negative, no symptoms, no nothing.”

During the meeting the President said that he and his physician, Navy Commander Sean Conley, thought the benefits outweighed the risks.

He said: “After numerous discussions he and I had regarding the evidence for and against the use of hydroxychloroquine, we concluded the potential benefit from treatment outweighed the relative risks.”

It’s uncertain how beneficial the treatment is to the President but it’s clear, he’s under supervision, and taking it after medical consultation.

The FDA cautioned medical professionals and potential patients against using the anti-malaria drugs hydroxychloroquine and chloroquine.

They stated that there have been reports of serious heart rhythm side-effects when used with other drugs, or in patients that have underlying conditions.

Their website reads: “The FDA is aware of reports of serious heart rhythm problems in patients with COVID-19 treated with hydroxychloroquine or chloroquine, often in combination with azithromycin and other QT prolonging medicines.  We are also aware of increased use of these medicines through outpatient prescriptions.  Therefore, we would like to remind health care professionals and patients of the known risks associated with both hydroxychloroquine and chloroquine.”

The FDA aren’t banning the use, but warning everyone of its potential issues.

Back in March, the FDA permitted the use of hydroxychloroquine and chloroquine when treating COVID-19 through its Emergency Use Authorization.