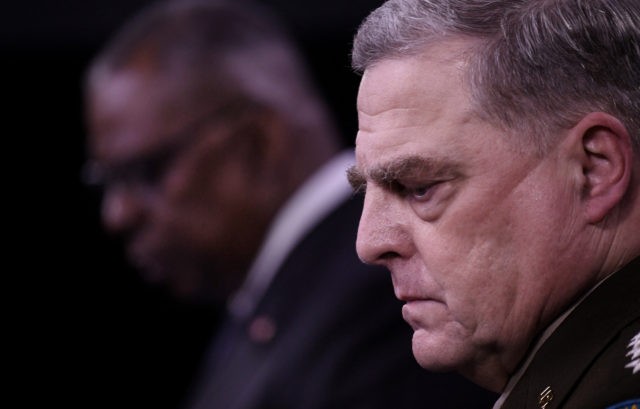 A spokesman for the Chairman of the Joint Chiefs of Staff Army Gen. Mark Milley on Wednesday confirmed some allegations contained in a new book that the chairman, allegedly fearing then-President Donald Trump would order a nuclear strike, had a meeting with other uniformed leaders and two phone calls with his Chinese counterpart.

Chairman of the Joint Chiefs of Staff, General Mark Milley, speaks during a press conference about the situation in Afghanistan. (OLIVIER DOULIERY/AFP via Getty Images).

The Chairman of the Joint Chiefs regularly communicates with Chiefs of Defense across the world, including with China and Russia. These conversations remain vital to improving mutual understanding of U.S. national security interests, reducing tensions, providing clarity and avoiding unintended consequences or conflict.

His calls with the Chinese and others in October and January were in keeping with these duties and responsibilities conveying reassurance in order to maintain strategic stability. All calls from the Chairman to his counterparts, including those reported, are staffed, coordinated and communicated with the Department of Defense and the interagency.

Also in keeping with his responsibilities as senior military advisor to the President and Secretary of Defense, General Milley frequently conducts meetings with uniformed leaders across the Services to ensure all leaders are aware of current issues. The meeting regarding nuclear weapons protocols was to remind uniformed leaders in the Pentagon of the long-established and robust procedures in light of media reporting on the subject.

General Milley continues to act and advise within his authority in the lawful tradition of civilian control of the military and his oath to the Constitution.

Milley is facing calls to resign or be fired, after reports about the book said Milley convened a secret meeting at the Pentagon on January 8 with other uniformed leaders, instructing them not to follow orders unless he was notified. That meeting came after he spoke to House Speaker Nancy Pelosi (D-CA), who expressed concerns about “precautions” to prevent Trump from launching a nuclear attack.

Speaker of the House Nancy Pelosi (D-CA) speaks during her weekly news conference at the U.S. Capitol. (Drew Angerer/Getty Images).

Milley also allegedly spoke twice to his Chinese counterpart, in calls that were not communicated to the president, in where he reassured him the U.S. would not attack China and that he would give them advance notice if Trump did order an attack against China. The calls allegedly took place four days before the 2020 election and after January 6.

Sens. Marco Rubio (R-FL), a China hawk, and Rand Paul (R-KY), as well as several members of the House, are calling for Milley to step down, be fired, or even court-martialed.

Milley’s spokesman’s statement confirmed the calls to China in October and January, but claimed that “all calls” were “staffed, coordinated and communicated” with the Department of Defense “and the interagency” — suggesting that the White House was informed.

The statement also confirmed the meeting with other uniformed leaders, but claimed it was to “remind uniformed leaders in the Pentagon of the long-established and robust procedures in light of media reporting on the subject.”