Pentagon: Vice President Kamala Harris ‘Has Made Very Clear Her Respect and Admiration’ for the Military 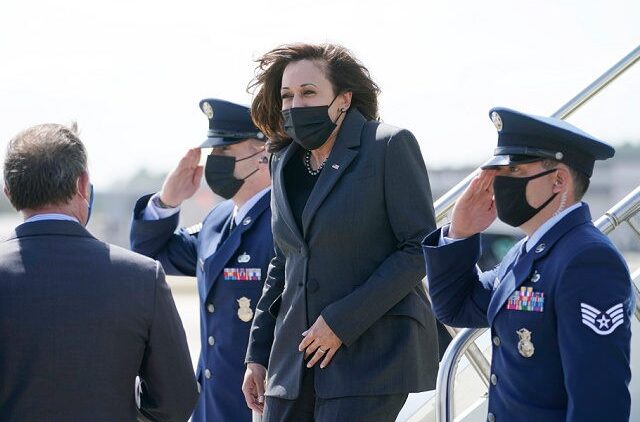 The Pentagon said in a statement Tuesday that Vice President Kamala Harris “has made very clear her respect and admiration” for the military after she received flak for not returning salutes by the Air Force honor guard welcoming her aboard Air Force Two.

“There is no overarching instruction or regulation that requires the President or Vice President to return hand salutes from members of the Armed Forces,” Pentagon Press Secretary John Kirby said in a statement.

“Vice President Harris has made very clear her respect and admiration for the men and women of the military, as well as their families,” he added.

Former New York City Police Commissioner Bernard B. Kerik pointed out on Monday evening that Harris did not salute the honor guard before she boarded Air Force Two, along with a video of Harris approaching and boarding the aircraft.

He tweeted, “DISGRACEFUL: @VP Kamala Harris refuses to salute the honor guard at the steps of the aircraft. It is a clear demonstration of her dislike for those in uniform, both law-enforcement and military.”

Former Acting Director of National Intelligence Richard Grenell tweeted shortly after: “This is a mistake. And she should correct it immediately.”

Turning Point USA Founder and President Charlie Kirk also brought attention to the video, tweeting, “Kamala Harris doesn’t salute members of the military as she gets on Air Force Two, breaking with a customary tradition of respect Remember when she and Joe Biden tried to sell the lie that *Trump* was the one who didn’t respect the troops?”

According to Fox News, Harris did not salute the honor guard on Monday, March 22, or during trips on March 15 and 16, or on a trip with President Biden on Air Force One on March 19.

“Recent vice presidents have maintained the practice of saluting the honor guard while entering and exiting Air Force Two,” the outlet reported.

The tradition of saluting the honor guard began with former President Ronald Reagan, according to the Florida Times-Union.

Asked about the protocol on saluting the president or vice president, the Pentagon said each service has its own regulations on when to salute.

While Kirby said there is no specific requirement for personnel to salute the vice president, the vice president does receive Honors, including cannon firing, Ruffles and flourishes, and specific music, when visiting military installations or participating in formal functions.

However, he said the rendering of the hand salute by military personnel is a “time-honored tradition and one of the first military lessons installed in new recruits.”

“From their first days in the military, new recruits are taught to salute when they meet more senior leaders – a common phrase among drill instructors is ‘When in doubt, throw it out.’ Our troops demonstrate their respect for the nation’s senior leaders in many ways; rending a hand salute is one of them,” he said,

Former President Donald Trump habitually saluted the honor guard when boarding and disembarking his aircraft. Once, before boarding Marine One, he stopped to pick up a Marine’s fallen cover and place it on his head before it flew off again in the wind.